What All The World's A-Seeking The Vital Law of True Life, True Greatness Power and Happiness 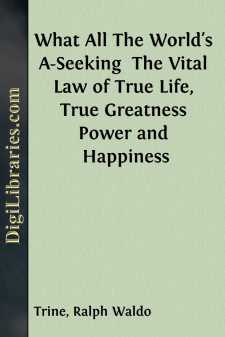 THE PRINCIPLE Would you find that wonderful life supernal,That life so abounding, so rich, and so free?Seek then the laws of the Spirit Eternal,With them bring your life into harmony.

How can I make life yield its fullest and best? How can I know the true secret of power? How can I attain to a true and lasting greatness? How can I fill the whole of life with a happiness, a peace, a joy, a satisfaction that is ever rich and abiding, that ever increases, never diminishes, that imparts to it a sparkle that never loses its lustre, that ever fascinates, never wearies?

No questions, perhaps, in this form or in that have been asked oftener than these. Millions in the past have asked them. Millions are asking them to-day. They will be asked by millions yet unborn. Is there an answer, a true and safe one for the millions who are eagerly and longingly seeking for it in all parts of the world to-day, and for the millions yet unborn who will as eagerly strive to find it as the years come and go? Are you interested, my dear reader, in the answer? The fact that you have read even thus far in this little volume whose title has led you to take it up, indicates that you are,—that you are but one of the innumerable company already mentioned.

It is but another way of asking that great question that has come through all the ages—What is the summum bonum in life? and there have been countless numbers who gladly would have given all they possessed to have had the true and satisfactory answer. Can we then find this answer, true and satisfactory to ourselves, surely the brief time spent together must be counted as the most precious and valuable of life itself. There is an answer: follow closely, and that our findings may be the more conclusive, take issue with me at every step if you choose, but tell me finally if it is not true and satisfactory.

There is one great, one simple principle, which, if firmly laid hold of, and if made the great central principle in one's life, around which all others properly arrange and subordinate themselves, will make that life a grand success, truly great and genuinely happy, loved and blessed by all in just the degree in which it is laid hold upon,—a principle which, if universally made thus, would wonderfully change this old world in which we live,—ay, that would transform it almost in a night, and it is for its coming that the world has long been waiting; that in place of the gloom and despair in almost countless numbers of lives would bring light and hope and contentment, and no longer would it be said as so truly to-day, that "man's inhumanity to man, makes countless thousands mourn"; that would bring to the life of the fashionable society woman, now spending her days and her nights in seeking for nothing but her own pleasure, such a flood of true and genuine pleasure and happiness and satisfaction as would make the poor, weak something she calls by this name so pale before it, that she would quickly see that she hasn't known what true pleasure is, and that what she has been mistaking for the real, the genuine, is but as a baser metal compared to the purest of gold, as a bit of cut glass compared to the rarest of diamonds, and that would make this same woman who scarcely deigns to notice the poor woman who washes her front steps, but who, were the facts known, may be living a much grander life, and consequently of much more value to the world than she herself, see that this poor woman is after all her sister, because child of the same Father; and that would make the humble life of this same poor woman beautiful and happy and sweet in its humility; that would give us a nation of statesmen in place of, with now and then an exception, a nation of politicians, each one bent upon his own personal aggrandizement at the expense of the general good; that would go far, ay, very far toward solving our great and hard-pressing social problems with which we are already face to face; that, in short, would make each man a prince among men, and each woman a queen among women....