Westward with the Prince of Wales 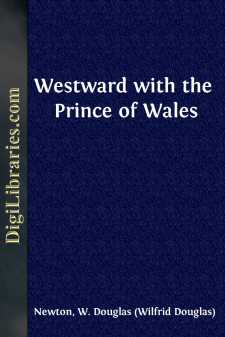 It was on Friday, August 1, 1919, that "the damned reporters" and the Times correspondent's hatbox went on board the light cruiser Dauntless at Devonport.

The Dauntless had just arrived from the Baltic to load up cigarettes—at least, that was the first impression. In the Baltic the rate of exchange had risen from roubles to packets of Players, and a handful of cigarettes would buy things that money could not obtain. Into the midst of a ship's company, feverishly accumulating tobacco in the hope of cornering at least the amber market of the world, we descended.

Actually, I suppose, His Royal Highness the Prince of Wales had been the first interrupter of the Dauntless' schemes. Lying alongside Devonport quay to refit—in that way were the cigarettes covered up—word was sent that the Dauntless with her sister ship, Dragon, was to act as escort to the battle-cruiser Renown when she carried the Prince to Canada.

Though he came first we could not expect to be as popular as the Prince, and when, therefore, those on board also learnt that the honour of acting as escort was to be considerably mitigated by a cargo from Fleet Street, they were no doubt justified in naming us "damned."

We did litter them up so. The Dauntless is not merely one of the latest and fastest of the light cruisers, she is also first among the smartest. To accommodate us they had to give way to a rash of riveters from the dock-yard who built cabins all over the graceful silhouette. When our telegrams, and ourselves, and our baggage (including the Times' hatbox) arrived piece by piece, each was merely an addition to the awful mess on deck our coming had meant.

Actually we could not help ourselves. Dock strikes, ship shortage and the holiday season had all conspired to make any attempt to get to Canada in a legitimate way a hopeless task. Only the Admiralty's idea to pre-date the carrying of commercial travellers on British battleships could get us to the West at all. The Admiralty, after modest hesitation, had agreed to send us in the Dauntless, and before the cruiser sailed we all realized how fortunate we were to have been unlucky at the outset.

We sailed on August 2 from Devonport, three days before Renown and Dragon left Portsmouth, and when one of us suggested that this was a happy idea to get us to St. John's, Newfoundland, in order to be ready for the Prince, he was told:

"Not at all, we're out looking for icebergs."

We were to act as the pilot ship over the course.

We found icebergs, many of them; even, we nearly rammed an iceberg in the middle of a foggy night, but we found other things, too.

We found that we had got onto what the Navy calls a "happy ship," and if anybody wants to taste what real good fellowship is I advise him to go to sea on what the Navy calls "a happy ship." However much we had disturbed them, the officers of the Dauntless did not let that make any difference in the warmth of their hospitality. We were made free of the ward-room, and that Baltic tobacco....