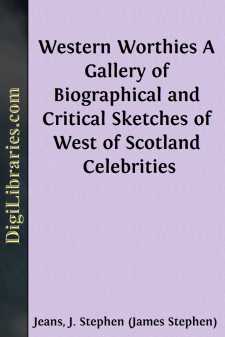 THE DUKE OF ARGYLL.

For its size and population Scotland has been remarkably prolific in the rearing of eminent statesmen, soldiers, and litterateurs. Viewed with respect to its relative importance as an item in the map of Europe, it has likewise a most chequered and eventful history—a history to which, in various essentials, no counterpart can be found elsewhere. Chiefly, however, has "the land of mountain and of flood" bulked largely in the records of the world, from the stern and heroic character and statesmenlike tendencies of its titled nobility, the lights and shadows of whose characters, as they are developed in the historic page, go a long way towards conferring upon Scotland the distinguishing qualities that have made her famous. As this is not intended to be even a bird's-eye view of Scottish history, we may have said enough by way of introducing the reader to one of the most noble and illustrious of the hereditary peerage of Scotland. Every schoolboy is more or less familiar with the annals of a race which has been identified through many ages with the interests—political, social, and commercial—of the West of Scotland. The Clan Campbell have been stigmatised as haughty, aggressive, and ambitious. The soft impeachment may be justly merited. Throughout the most exciting and eventful crises of their country's history, the Campbells have always borne a distinguished and conspicuous part, both in the field of battle and in the Councils of State. Unlike not a few families and clans who can boast of a lineage almost if not quite as ancient and noble as their own, their name and fame are not "to hastening ills a prey." The lapse of years has not dimmed the lustre of their achievements, or caused them to lie upon their oars inactive and inglorious. The present head of their clan—the Duke of Argyll—has in his day and generation been as distinguished as any of his more formidable ancestry. Their prospective head—the Marquis of Lorne—has passed the Rubicon of Royal etiquette, allied himself with a Princess of the Blood, and gives promise of a most useful and distinguished career. The clan can further claim for themselves six members of the British Peerage, and no less than twenty-two Baronets, nearly every one of whom has been raised from the ranks for conspicuous merit in one sphere or another. In almost every relation of life, the clan has had honour and glory reflected upon it through some of its members; and, in consideration of its past, present, and future importance, the possessor of the name of Campbell may feel a justifiable pride in the stock from which he springs.

George Douglas Campbell, the present head of the Ducal House of Argyll, unites in himself many of the most estimable qualities that enabled his ancestors, apart from the mere accident of birth, to achieve greatness. That he is one of the most exalted of Scotland's aristocracy, a great territorial magnate, and entitled to take a high place in the Council of the nation, are facts external and independent of his own intrinsic merits. But the same remark does not apply to the Duke's rare diplomatic and literary abilities, to the sageness of his wisdom, to the maturity end value of his experience, and to the kindly qualities of his heart. Pope spoke of an ancestor of his Grace as—

"Argyll, the State's whole thunder born to wield.And shake alike the Senate and the field;"

but if the poet had applied his Muse to describe the living representative of the noble House he could justly have bestowed upon him a much greater meed of praise. It is a rare conjunction to find one who is born great, seek also to achieve greatness; but this His Grace has done in an eminent degree. The adventitious circumstances of his birth placed him in a position only a few removes from Royalty itself, but not content with mere physical greatness, and realising that "the mind's the standard of the man," he has applied himself diligently to the acquisition of wisdom, until both in the domain of politics and in the still more cosmopolitan sphere of belles lettres he has, perhaps, made himself more conspicuous by his sheer native worth than any other member of the aristocracy of Scotland. Intimately associated from his earliest years with the civil and ecclesiastical affairs of his native country, he has been enabled, in his time, to do the State some service; and when the "history of Scotland in the nineteenth century" shall come to be written, the Duke of Argyll will be mentioned with honour and grateful regard....