Western Characters or Types of Border Life in the Western States 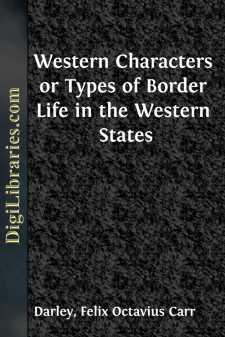 INTRODUCTORY. —“Our Mississippi, rolling proudly on,Would sweep them from its path, or swallow up,Like Aaron's rod, those streams of fame and song.” Mrs. Hale.

The valley of a river like the channel of a man's career, does not always bear proportion to the magnitude or volume of the current, which flows through it. Mountains, forests, deserts, physical barriers to the former—and the obstacles of prejudice, and accidents of birth and education, moral barriers to the latter—limit, modify, and impair the usefulness of each. A river thus confined, an intellect thus hampered, may be noisy, fretful, turbulent, but, in the contemplation, there is ever a feeling of the incongruity between the purpose and the power; and it is only when the valley is extended, the field of effort open, that we can avoid the impression of energy wasted, and strength frittered away. The great intellect, whose scope is not confined by ancient landmarks, or old prejudices, is thus typified by the broad, deep river, whose branches penetrate the Earth on every hand, and add to the current the tributaries of all climes. In this view, how noble an object is the Mississippi!

In extent, fertility, variety of scenery, and diversity of climate, its valley surpasses any other in the world. It is the great aorta of the continent, and receives a score of tributary rivers, the least of which is larger than the vaunted streams of mighty empires. It might furnish natural boundaries to all Europe, and yet leave, for every country, a river greater than the Seine. It discharges, in one year, more water than has issued from the Tiber in five centuries; it swallows up near fifty nameless rivers longer than the Thames; the addition of the waters of the Danube would not swell it half a fathom; and in a single bend, the navies of the world might safely ride at anchor, five hundred miles from sea.

It washes the shores of twelve powerful states, and between its arms lies space enough for twenty more. The rains which fall upon the Alleghenies, and the snows that shroud the slopes and cap the summits of the Rocky mountains, are borne upon its bosom, to the regions of perpetual summer, and poured into the sea, more than fifteen hundred leagues from their sources. It has formed a larger tract of land, by the deposits of its inundations, than is contained in Great Britain and Ireland; and every year it roots up and bears away more trees, than there are in the Black Forest. At a speed unknown to any other great river, it rolls a volume, in whose depths the cathedral of St. Paul's might be sunk out of sight; and five hundred leagues from its mouth, it is wider than at thirty.

It annually bears away more acres than it would require to make a German principality, engulfing more than the revenues of many a petty kingdom. Beneath its turbid waters lie argosies of wealth, and floating palaces, among whose gilded halls and rich saloons are sporting slimy creatures; below your very feet, as you sail along its current, are resting in its bed, half buried in the sand, the bodies of bold men and tender maidens; and their imploring hands are raised toward Heaven, and the world which floats, unheeding, on the surface. There lies, entombed, the son whose mother knows not of his death; and there the husband, for whose footstep, even yet, the wife is listening—here, the mother with her infant still clasped fondly to her breast; and here, united in their lives, not separated in their death, lie, side by side, the bride and bridegroom of a day;—and, hiding the dread secrets from all human ken, the mighty and remorseless river passes onward, like the stream of human life, toward “the land of dreams and shadows!”

To the contemplative mind, there is, perhaps, no part of the creation, in which may not be found the seed of much reflection; but of all the grand features of the earth's surface, next to a lofty mountain, that which impresses us most deeply is a great river....