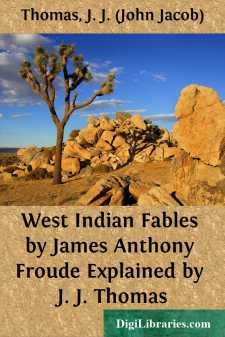 [5] Last year had well advanced towards its middle—in fact it was already April, 1888—before Mr. Froude's book of travels in the West Indies became known and generally accessible to readers in those Colonies.

My perusal of it in Grenada about the period above mentioned disclosed, thinly draped with rhetorical flowers, the dark outlines of a scheme to thwart political aspiration in the Antilles. That project is sought to be realized by deterring the home authorities from granting an elective local legislature, however restricted in character, to any of the Colonies not yet enjoying such an advantage. An argument based on the composition of the inhabitants of those Colonies is confidently relied upon to confirm the inexorable mood of Downing Street.

[6] Over-large and ever-increasing,—so runs the argument,—the African element in the population of the West Indies is, from its past history and its actual tendencies, a standing menace to the continuance of civilization and religion. An immediate catastrophe, social, political, and moral, would most assuredly be brought about by the granting of full elective rights to dependencies thus inhabited. Enlightened statesmanship should at once perceive the immense benefit that would ultimately result from such refusal of the franchise. The cardinal recommendation of that refusal is that it would avert definitively the political domination of the Blacks, which must inevitably be the outcome of any concession of the modicum of right so earnestly desired. The exclusion of the Negro vote being inexpedient, if not impossible, the exercise of electoral powers by the Blacks must lead to their returning candidates of their own race to the local legislatures, and that, too, in numbers preponderating according to the majority of the Negro electors. The Negro legislators thus supreme in the councils of the Colonies would straightway proceed to pass vindictive and retaliatory laws against their white fellow- [7] colonists. For it is only fifty years since the White man and the Black man stood in the reciprocal relations of master and slave. Whilst those relations subsisted, the white masters inflicted, and the black slaves had to endure, the hideous atrocities that are inseparable from the system of slavery. Since Emancipation, the enormous strides made in self-advancement by the ex-slaves have only had the effect of provoking a resentful uneasiness in the bosoms of the ex-masters. The former bondsmen, on their side, and like their brethren of Hayti, are eaten up with implacable, blood-thirsty rancour against their former lords and owners. The annals of Hayti form quite a cabinet of political and social object lessons which, in the eyes of British statesmen, should be invaluable in showing the true method of dealing with Ethiopic subjects of the Crown. The Negro race in Hayti, in order to obtain and to guard what it calls its freedom, has outraged every humane instinct and falsified every benevolent hope. The slave-owners there had not been a whit more cruel than slave-owners in the other islands. But, in spite of this, how ferocious, how sanguinary, [8] how relentless against them has the vengeance of the Blacks been in their hour of mastery!...