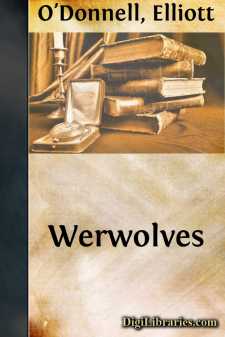 CHAPTER I WHAT IS A WERWOLF?

WHAT is a werwolf? To this there is no one very satisfactory reply. There are, indeed, so many diverse views held with regard to the nature and classification of werwolves, their existence is so keenly disputed, and the subject is capable of being regarded from so many standpoints, that any attempt at definition in a restricted sense would be well-nigh impossible.

The word werwolf (or werewolf) is derived from the Anglo-Saxon wer, man, and wulf, wolf, and has its equivalents in the German Währwolf and French loup-garou, whilst it is also to be found in the languages, respectively, of Scandinavia, Russia, Austria-Hungary, the Balkan Peninsula, and of certain of the countries of Asia and Africa; from which it may be concluded that its range is pretty well universal.

This, perhaps, expresses most of what is general concerning werwolves. For more particular features, upon which I will touch later, one must look to locality and time.

Those who are sceptical with regard to the existence of the werwolf, and refuse to accept, as proof of such existence, the accumulated testimony of centuries, attribute the origin of the belief in the phenomenon merely to an insane delusion, which, by reason of its novelty, gained a footing and attracted followers.

Humanity, they say, has ever been the same; and any fresh idea—no matter how bizarre or monstrous, so long as it is monstrous enough—has always met with support and won credence.

In favour of this argument it is pointed out that in many of the cases of persons accused of werwolfery, tried in France, and elsewhere, in the middle of the sixteenth century, when belief in this species of lycanthropy was at its zenith, there was an extraordinary readiness among the accused to confess, and even to give circumstantial evidence of their own metamorphosis; and that this particular form of self-accusation at length became so popular among the leading people in the land, that the judicial court, having its suspicions awakened, and, doubtless, fearful of sentencing so many important personages, acquitted the majority of the accused, announcing them to be the victims of delusion and hysteria....