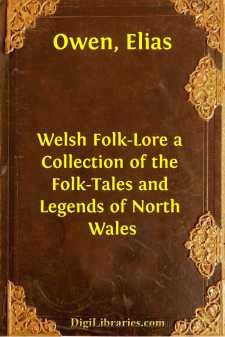 To this Essay on the “Folk-lore of North Wales,” was awarded the first prize at the Welsh National Eisteddfod, held in London, in 1887.  The prize consisted of a silver medal, and £20.  The adjudicators were Canon Silvan Evans, Professor Rhys, and Mr Egerton Phillimore, editor of the Cymmrodor.

By an arrangement with the Eisteddfod Committee, the work became the property of the publishers, Messrs. Woodall, Minshall, & Co., who, at the request of the author, entrusted it to him for revision, and the present Volume is the result of his labours.

Before undertaking the publishing of the work, it was necessary to obtain a sufficient number of subscribers to secure the publishers from loss.  Upwards of two hundred ladies and gentlemen gave their names to the author, and the work of publication was commenced.  The names of the subscribers appear at the end of the book, and the writer thanks them one and all for their kind support.  It is more than probable that the work would never have been published had it not been for their kind assistance.  Although the study of Folk-lore is of growing interest, and its importance to the historian is being acknowledged; still, the publishing of a work on the subject involved a considerable risk of loss to the printers, which, however, has been removed in this case, at least to a certain extent, by those who have subscribed for the work.

The sources of the information contained in this essay are various, but the writer is indebted, chiefly, to the aged inhabitants of Wales, for his information.  In the discharge of his official duties, as Diocesan Inspector of Schools, he visited annually, for seventeen years, every parish in the Diocese of St. Asaph, and he was thus brought into contact with young and old.  He spent several years in Carnarvonshire, and he had a brother, the Revd. Elijah Owen, M.A., a Vicar in Anglesey, from whom he derived much information.  By his journeys he became acquainted with many people in North Wales, and he hardly ever failed in obtaining from them much singular and valuable information of bye-gone days, which there and then he dotted down on scraps of paper, and afterwards transferred to note books, which still are in his possession.

It was his custom, after the labour of school inspection was over, to ask the clergy with whom he was staying to accompany him to the most aged inhabitants of their parish.  This they willingly did, and often in the dark winter evenings, lantern in hand, they sallied forth on their journey, and in this way a rich deposit of traditions and superstitions was struck and rescued from oblivion.  Not a few of the clergy were themselves in full possession of all the quaint sayings and Folk-lore of their parishes, and they were not loath to transfer them to the writer’s keeping.  In the course of this work, the writer gives the names of the many aged friends who supplied him with information, and also the names of the clergy who so willingly helped him in his investigations.  But so interesting was the matter obtained from several of his clerical friends, that he thinks he ought in justice to acknowledge their services in this preface.  First and foremost comes up to his mind, the Rev. R. Jones, formerly Rector of Llanycil, Bala, but now of Llysfaen, near Abergele.  This gentleman’s memory is stored with reminiscences of former days, and often and again his name occurs in these pages.  The Rev. Canon Owen Jones, formerly Vicar of Pentrefoelas, but now of Bodelwyddan, near Rhyl, also supplied much interesting information of the people’s doings in former days, and I may state that this gentleman is also acquainted with Welsh literature to an extent seldom to be met with in the person of an isolated Welsh parson far removed from books and libraries.  To him I am indebted for the perusal of many MSS.  To the Rev. David James, formerly Rector of Garthbeibio, now of Pennant, and to his predecessor the Rev. W. E. Jones, Bylchau; the late Rev. Ellis Roberts (Elis Wyn o Wyrfai); the Rev. M. Hughes, Derwen; the Rev. W. J. Williams, Llanfihangel-Glyn-Myfyr, and in a great degree to his aged friend, the Rev. E. Evans, Llanfihangel, near Llanfyllin, whose conversation in and love of Welsh literature of all kinds, including old Welsh Almanacks, was almost without limit, and whose knowledge and thorough sympathy with his countrymen made his company most enjoyable.  To him and to all these gentlemen above named, and to others, whose names appear in the body of this work, the writer is greatly indebted, and he tenders his best thanks to them all....