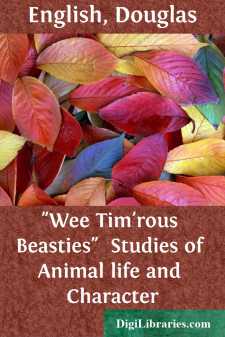 Mus ridiculus! The taunt had been flung at him by a stout field-vole, and, by reason of its novelty as well as of its intrinsic impertinence, had sunk deep into his memory. He had felt at the time that “Wee sleekit, cowrin’, tim’rous beastie” was but a poor rejoinder. But he knew no Latin and chose what was next in obscurity. Besides, he was a young mouse then, and breathless with excitement.

The scene rose vividly before him—the moon shining grimly overhead, and the mouse-folk stealing from the half-threshed stack across two fields into the farmstead.

Since that night he had never entered a wheat-stack, for fear of the leaving of it. For there are some things which, from a mouse standpoint, will not bear repetition.

There had been a grey, slanting ghost-swish above, and his brother had vanished skywards from within an inch of his side. He had turned to stone before two ice-cold eyes, and realized the honest yard of snake behind them. A stoat had passed him with its mouth too full to snap—and all within two fields.

Mus ridiculus! The vole was not so far wrong after all, for could anything, whose intelligence was otherwise than laughable, be in his present plight? In front of him were three horizontal wires, above him were nine more, on either side an upright wooden wall, behind him a slanting one, whose lower extremity nipped his tail. On the floor lay innumerable crumbs of evil-smelling cheese.

When the door of the trap had clicked behind him, he had naturally been startled. His fright, however, was due not so much to his surroundings—he was used to close quarters—as to the forcible restriction of his tail. Still, the cheese was within easy reach, and he had determined to enjoy it. Indeed, he ate his full. Now, cheese on an empty mouse stomach acts as an intoxicant. He had fallen into a drowsy slumber, crouched in a back corner of the trap, and so he slept for an hour.

His awakening was gradual, but rude. It was due to a steadily increasing discomfort in his tail. It was not the first time, however, that he had realized that a long, tapering tail has its disadvantages as well as its uses. As a controllable balancing-pole, there is probably nothing to equal it. As a parachute, it serves its purpose in a precipitate leap. As a decoy, it frequently disturbs the enemy’s aim. But, when once it is firmly jammed, it is liable to congestion, and this is what awoke the mouse.

At first he was inclined to treat the matter lightly. He had been caught by the tail often enough, after all. He tried the normal methods of release. Swinging round on his haunches, he caught the offending member between his two fore-paws, so as to ease it out by gentle side-shifts. Then he brought his tongue into play as a lubricant. Then he simply pulled. By this time he was fairly awake and could feel.

It was unfortunate that a door banged above him, for, mouse-like, he leapt forward with all his leaping strength. The leap freed him, but at a price, and the price was his tail, or, rather, all that made a tail worth having....