Webster's Seventh of March Speech and the Secession Movement, 1850 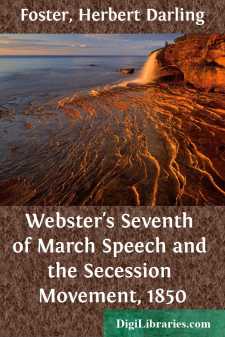 During the session of Congress of 1849-1850, the peace of the Union was threatened by problems centering around slavery and the territory acquired as a result of the Mexican War: California's demand for admission with a constitution prohibiting slavery; the Wilmot Proviso excluding slavery from the rest of the Mexican acquisitions (Utah and New Mexico); the boundary dispute between Texas and New Mexico; the abolition of slave trade in the District of Columbia; and an effective fugitive slave law to replace that of 1793.

The evidence for the steadily growing danger of secession until March, 1850, is no longer to be sought in Congressional speeches, but rather in the private letters of those men, Northern and Southern, who were the shrewdest political advisers of the South, and in the official acts of representative bodies of Southerners in local or state meetings, state legislatures, and the Nashville Convention. Even after the compromise was accepted in the South and the secessionists defeated in 1850-1851, the Southern states generally adopted the Georgia platform or its equivalent declaring that the Wilmot Proviso or the repeal of the fugitive-slave law would lead the South to "resist even (as a last resort) to a disruption of every tie which binds her to the Union". Southern disunion sentiment was not sporadic or a party matter; it was endemic.

The disunion sentiment in the North was not general; but Garrison, publicly proclaiming "I am an abolitionist and therefore for the dissolution of the Union", and his followers who pronounced "the Constitution a covenant with death and an agreement with hell", exercised a twofold effect far in excess of their numbers. In the North, abolitionists aroused bitter antagonism to slavery; in the South they strengthened the conviction of the lawfulness of slavery and the desirability of secession in preference to abolition. "The abolition question must soon divide us", a South Carolinian wrote his former principal in Vermont. "We are beginning to look upon it [disunion] as a relief from incessant insult. I have been myself surprised at the unusual prevalence and depth of this feeling." "The abolition movement", as Houston has pointed out, "prevented any considerable abatement of feeling, and added volume to the current which was to sweep the State out of the Union in 1860." South Carolina's ex-governor, Hammond, wrote Calhoun in December, 1849, "the conduct of the abolitionists in congress is daily giving it [disunion] powerful aid". "The sooner we can get rid of it [the union] the better." The conclusion of both Blair of Kentucky and Winthrop of Massachusetts, that "Calhoun and his instruments are really solicitous to break up the Union", was warranted by Calhoun's own statement.

Calhoun, desiring to save the Union if he could, but at all events to save the South, and convinced that there was "no time to lose", hoped "a decisive issue will be made with the North". In February, 1850, he wrote, "Disunion is the only alternative that is left us." At last supported by some sort of action in thirteen Southern states, and in nine states by appointment of delegates to his Southern Convention, he declared in the Senate, March 4, "the South, is united against the Wilmot proviso, and has committed itself, by solemn resolutions, to resist should it be adopted"....