We Ten Or, The Story of the Roses 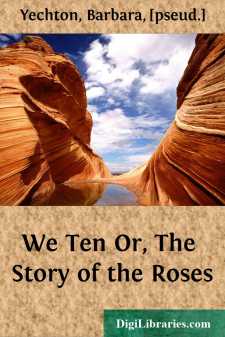 ROSES AND ROSES. TOLD BY JACK.

WHEN papa said positively that only Phil could go to college, we all felt so badly for Felix that we held a council in the schoolroom that very afternoon. At least, six of us did; the other four had been ruled out by Felix, who declared that "kids were not allowed in council." Paul and Mädel didn't mind so much,—they're the twins, they're only seven years old; nor did Alan,—he's the baby; but Kathie was awfully mad: you see, she's nearly ten, and she does love to hear all that's going on. When she gets crying, there's no stopping her, and I tell you she made things pretty lively round that schoolroom for a little while. How she did howl! We were so afraid she'd start Alan, and that the noise would reach papa's study; good-bye then to our council. We got provoked with Kathie; it was so silly of her to stand there crying like a big baby, and keeping us back that way.

First Phil called out, "You just stop, this minute, Kathie!" and then, when she kept right on, he threw the old sofa pillow at her, and told her to go smother herself; Nora said, "Horrid child!" in her most disgusted tone, and Nannie and Betty coaxed and coaxed, trying to quiet her.

But nothing had any effect until Felix limped over to his easel. Felix is lame,—dear old Fee!—but my! isn't he clever! Greek and Latin are just as easy as—as—anything to him, and he writes stories and poems,—though nobody knows this 'cept us children and Miss Marston, and we wouldn't tell for the world,—and he paints the most beautiful pictures you ever saw. Well, as I was telling you, he limped over to his easel, and took up his brush. "Just keep that charming expression on your face a few minutes longer, Kathie," he said, "until I get it on canvas; and I'll paint your picture as the 'Schoolroom Vixen,' and send it to the Academy. That's right, open your mouth just a little wider—what a wonderful cavern!—hullo! why'd you stop crying? I'm not half through."

That quieted my lady! You see she was afraid he was in earnest; and after Nannie had wiped her eyes for her, and given her the last piece of chocolate in her box, off she went to the other end of the room, and began playing house with the twins and Alan under the schoolroom table, as nicely as you please.

Then the council began. Nannie said it was called to discuss "ways and means." I suppose by that she meant to see if there was any way that Felix could go to college too; but, as usual, in a very little while everybody began to take "sides," and then, the first thing we knew, we were all talking at the same time, and just as loud as ever we could. That's a way we have,—all talking and nobody listening. What a din there was, until Felix scrambled up on a chair and pounded on the floor with his cane, and shouted out louder than anybody else: "Who am I talking to? I will be heard!" That made everybody laugh, and brought us back to business; but in a few minutes we were just as bad again.

We're the greatest family for taking sides that you ever heard of, and we do get so excited over things!...