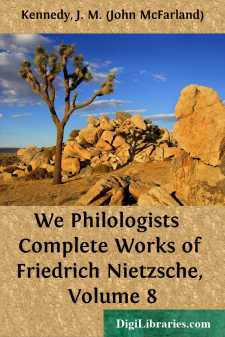 To what a great extent men are ruled by pure hazard, and how little reason itself enters into the question, is sufficiently shown by observing how few people have any real capacity for their professions and callings, and how many square pegs there are in round holes: happy and well chosen instances are quite exceptional, like happy marriages, and even these latter are not brought about by reason. A man chooses his calling before he is fitted to exercise his faculty of choice. He does not know the number of different callings and professions that exist; he does not know himself; and then he wastes his years of activity in this calling, applies all his mind to it, and becomes experienced and practical. When, afterwards, his understanding has become fully developed, it is generally too late to start something new; for wisdom on earth has almost always had something of the weakness of old age and lack of vigour about it.

For the most part the task is to make good, and to set to rights as well as possible, that which was bungled in the beginning. Many will come to recognise that the latter part of their life shows a purpose or design which has sprung from a primary discord: it is hard to live through it. Towards the end of his life, however, the average man has become accustomed to it—then he may make a mistake in regard to the life he has lived, and praise his own stupidity: bene navigavi cum naufragium feci . he may even compose a song of thanksgiving to "Providence."

On inquiring into the origin of the philologist I find:

1. A young man cannot have the slightest conception of what the Greeks and Romans were.

2. He does not know whether he is fitted to investigate into them;

3. And, in particular, he does not know to what extent, in view of the knowledge he may actually possess, he is fitted to be a teacher. What then enables him to decide is not the knowledge of himself or his science; but

(b) The convenience of carrying on the kind of work which he had begun at school.

(c) His intention of earning a living.

The more strict religions require that men shall look upon their activity simply as one means of carrying out a metaphysical scheme: an unfortunate choice of calling may then be explained as a test of the individual. Religions keep their eyes fixed only upon the salvation of the individual . whether he is a slave or a free man, a merchant or a scholar, his aim in life has nothing to do with his calling, so that a wrong choice is not such a very great piece of unhappiness. Let this serve as a crumb of comfort for philologists in general; but true philologists stand in need of a better understanding: what will result from a science which is "gone in for" by ninety-nine such people? The thoroughly unfitted majority draw up the rules of the science in accordance with their own capacities and inclinations; and in this way they tyrannise over the hundredth, the only capable one among them....