We of the Never-Never 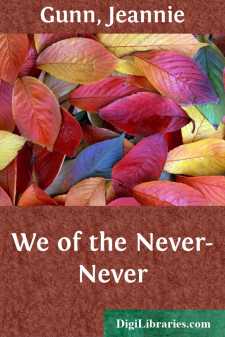 To begin somewhere near the beginning, the Maluka—better known at that time as the new Boss for the Elsey—and I, his "missus," were at Darwin, in the Northern Territory, waiting for the train that was to take us just as far as it could—one hundred and fifty miles—on our way to the Never-Never. It was out of town just then, up-country somewhere, billabonging in true bush-whacker style, but was expected to return in a day or two, when it would be at our service.

Jack, the Quiet Stockman, was out at the homestead, "seeing to things" there. The Sanguine Scot, the Head Stockman, and the Dandy, were in at the Katherine, marking time, as it were, awaiting instructions by wire from the Maluka, while some of the Company "put finishing touches" to their New Year celebrations. And every one, with, of course, the exception of those in Darwin, was blissfully unconscious of even the existence of the Maluka's missus. Knowing the Maluka by repute, however, every one was agreed that the "Elsey had struck it lucky," until the telegraph wire, whispering the gossip of Darwin to the Katherine, whispered that the "new Boss for the Elsey had been and gone and married a missus just before leaving the South, and was bringing her along with him." Then the Sanguine Scot was filled with wrath, the Company with compassion, while the Dandy's consternation found relief in a dismayed "Heavens above!" (The Dandy, by the way, was only a dandy in his love of sweet, clean clothes and orderly surroundings. The heart of the man had not a touch of dandyism in it.) The Head Stockman was absent in his camp. Had he been present, much might have been said on the "advantages of having a woman about the place." The Wag, however, retained his usual flow of speech and spirits.

"Buck up, chaps!" he chuckled encouraging! "They're not all snorters, you know. You might have the luck to strike one of the "ministering angel variety."

But the Sanguine Scot had been thinking rapidly, and with characteristic hopefulness, felt he had the bull by the horns. "We'll just have to block her, chaps; that's all," he said. "A wire or two should do it"; and, inviting the Dandy "to come and lend a hand," led the way to the telegraph office; and presently there quivered into Darwin the first hint that a missus was not wanted at the Elsey.

"Would advise leaving wife behind till homestead can be repaired," it said; and, still confident of success, Mac felt that "ought to do the trick." "If it doesn't," he added, "we'll give her something stronger."

We in Darwin, having exhausted the sight-seeing resources of the little town, were wishing "something interesting would happen," when the message was handed to the Maluka.

"This may do as a stopgap," he said, opening it, adding as he read it, "It looks brimful of possibilities for interested onlookers, seeing it advises leaving the wife behind." The Maluka spoke from experience, having been himself an interested onlooker "down south," when it had been suggested there that the wife should be left behind while he spied out the land; for although the Maluka knew most of the Territory, he had not yet been to the Elsey Cattle Station....