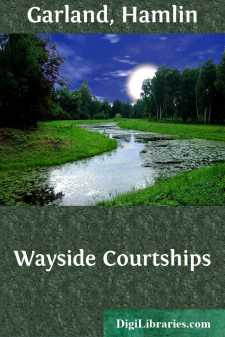 She was in the box; he was far above in the gallery.

He looked down and across and saw her sitting there fair as a flower and robed like a royal courtesan in flame and snow.

Like a red torch flamed the ruby in her hair. Her shoulders were framed in her cloak, white as marble warmed with firelight. Her gloved hands held an opera glass which also glowed with flashing light.

His face grew dark and stern. He looked down at his poor coat and around at the motley gallery which reeked with the smell of tobacco and liquor.

Students were there—poor like himself, but with great music-loving, hungry, ambitious souls. Men and women of refinement and indomitable will sat side by side with drunken loafers who had chanced to stumble up the stairway.

His eyes went back to her. So sweet and dainty was every thread on her fair body. No smell of toil, nor touch of care, nor mark of weariness. Her flesh was ivory, her eyes were jewels, her heart was as clean and sweet as her eyes. She was perfectly clothed, protected, at ease.

No, not at ease. She seemed restless. Again and again she swept her glass around the lower balcony.

The man in the gallery knew she was looking for him, and he took a bitter delight in the distance between them. He waited, calm as a lion in his power.

The man at her elbow talks on. She does not hear. She is still looking—a little swifter, a little more anxiously—her red lips ready to droop in disappointment.

The noise of feet, of falling seats, continues. Boys call shrilly. Ushers dart hastily to and fro. The soft laughter and hum of talk come up from below.

She has reached the second balcony. She sweeps it hurriedly. Her companion raises his eyes to the same balcony and laughs as he speaks. She colors a little, but smiles as she lifts her eyes to the third balcony.

Suddenly the glass stops. The color surges up her neck, splashing her cheeks with red. Her breath stops also for a moment, then returns quick and strong.

Her smile settles into a curious contraction that is almost painful to see. His unsmiling eyes are looking somberly, sternly, accusingly into hers. They are charged with all the bitterness and hate and disappointed ambition which social injustice and inequality had wrought into his soul.

She shivered and dropped her glass. Shivered and drew her fleecy, pink and pale-blue cloak closer about her bare neck.

Her face grew timid, almost appealing, as she turned it upward toward him like a flower, to be kissed across the height that divided him from her.

His heart swelled with exultation. His face softened. From the height of his intellectual pride he bent his head and sent a winged caress fluttering down upon that flowerlike face.

And then the stealing harmony of the violins began, gliding like mist above the shuddering, tumultuous, obscure thunder of the drums, and the man's soul swept across that sea of song with the heart of a lion and the wings of an eagle.

A tender, musing smile was on the woman's lips.