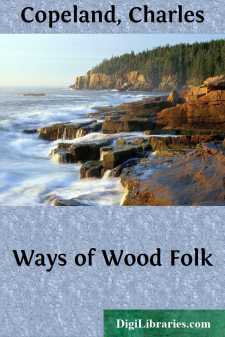 Did you ever meet a fox face to face, surprising him quite as much as yourself? If so, you were deeply impressed, no doubt, by his perfect dignity and self-possession. Here is how the meeting generally comes about.

It is a late winter afternoon. You are swinging rapidly over the upland pastures, or loitering along the winding old road through the woods. The color deepens in the west; the pines grow black against it; the rich brown of the oak leaves seems to glow everywhere in the last soft light; and the mystery that never sleeps long in the woods begins to rustle again in the thickets. You are busy with your own thoughts, seeing nothing, till a flash of yellow passes before your eyes, and a fox stands in the path before you, one foot uplifted, the fluffy brush swept aside in graceful curve, the bright eyes looking straight into yours—nay, looking through them to read the intent which gives the eyes their expression. That is always the way with a fox; he seems to be looking at your thoughts.

Surprise, eagerness, a lively curiosity are all in your face on the instant; but the beautiful creature before you only draws himself together with quiet self-possession. He lifts his head slightly; a superior look creeps into his eyes; he seems to be speaking. Listen—

"You are surprised?"—this with an almost imperceptible lift of his eyebrows, which reminds you somehow that it is really none of your affair. "O, I frequently use this road in attending to some matters over in the West Parish. To be sure, we are socially incompatible; we may even regard each other as enemies, unfortunately. I did take your chickens last week; but yesterday your unmannerly dogs hunted me. At least we may meet and pass as gentlemen. You are the older; allow me to give you the path."

Dropping his head again, he turns to the left, English fashion, and trots slowly past you. There is no hurry; not the shadow of suspicion or uneasiness. His eyes are cast down; his brow wrinkled, as if in deep thought; already he seems to have forgotten your existence. You watch him curiously as he reenters the path behind you and disappears over the hill. Somehow a queer feeling, half wonder, half rebuke, steals over you, as if you had been outdone in courtesy, or had passed a gentleman without sufficiently recognizing him.

Ah, but you didn't watch sharply enough! You didn't see, as he circled past, that cunning side gleam of his yellow eyes, which understood your attitude perfectly. Had you stirred, he would have vanished like a flash. You didn't run to the top of the hill where he disappeared, to see that burst of speed the instant he was out of your sight. You didn't see the capers, the tail-chasing, the high jumps, the quick turns and plays; and then the straight, nervous gallop, which told more plainly than words his exultation that he had outwitted you and shown his superiority.

Reynard, wherever you meet him, whether on the old road at twilight, or on the runway before the hounds, impresses you as an animal of dignity and calculation. He never seems surprised, much less frightened; never loses his head; never does things hurriedly, or on the spur of the moment, as a scatter-brained rabbit or meddling squirrel might do. You meet him, perhaps as he leaves the warm rock on the south slope of the old oak woods, where he has been curled up asleep all the sunny afternoon. (It is easy to find him there in winter.) Now he is off on his nightly hunt; he is trotting along, head down, brows deep-wrinkled, planning it all out.

"Let me see," he is thinking, "last night I hunted the Draper woods. To-night I'll cross the brook just this side the old bars, and take a look into that pasture-corner among the junipers. There's a rabbit which plays round there on moonlight nights; I'll have him presently. Then I'll go down to the big South meadow after mice....