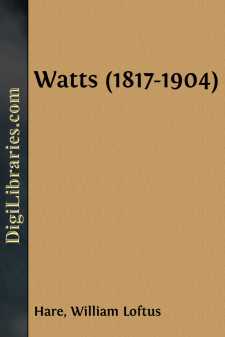 I A BIOGRAPHICAL OUTLINE

In July of 1904 the eighty-seven mortal years of George Frederick Watts came to an end. He had outlived all the contemporaries and acquaintances of his youth; few, even among the now living, knew him in his middle age; while to those of the present generation, who knew little of the man though much of his work, he appeared as members of the Ionides family, thus inaugurating the series of private and public portraits for which he became so famous. The Watts of our day, however, the teacher first and the painter afterwards, had not yet come on the scene. His first aspiration towards monumental painting began in the year 1843, when in a competition for the decoration of the Houses of Parliament he gained a prize of £300 for his cartoon of "Caractacus led Captive through the Streets of Rome." At this time, when history was claiming pictorial art as her servant and expositor, young Watts carried off the prize against the whole of his competitors. This company included the well-known historical painter Haydon, who, from a sense of the impossibility of battling against his financial difficulties, and from the neglect, real or fancied, of the leading politicians, destroyed himself by his own hand.

The £300 took the successful competitor to Italy, where for four years he remained as a guest of Lord Holland. Glimpses of the Italy he gazed upon and loved are preserved for us in a landscape of the hillside town of Fiesole with blue sky and clouds, another of a castellated villa and mountains near Florence, and a third of the "Carrara Mountains near Pisa"; while of his portraiture of that day, "Lady Holland" and "Lady Dorothy Nevill" are relics of the Italian visit.

In this terrible figure, half man, half bull, gazing over the sea from the battlement of a hill tower, we see the artist's representation of the greed and lust associated with modern civilisations. The picture was exhibited at the Winter Exhibition of the New Gallery, 1896, and formed part of the Watts Gift in 1897. It hangs in the Watts Room at the Tate Gallery.

Italy, and particularly Florence, was perpetual fascination and inspiration to Watts. There he imbibed the influences of Orcagna and Titian—influences, indeed, which were clearly represented in the next monumental painting which he attempted. It came about that Lord Holland persuaded his guest to enter a fresh competition for the decoration of the Parliament Houses, and Watts carried off the prize with his "Alfred inciting the Saxons to resist the landing of the Danes." The colour and movement of the great Italian masters, conspicuously absent from the "Caractacus" cartoon, were to be seen in this new effort, where, as has been said, the English king stands like a Raphaelesque archangel in the midst of the design.

In 1848 Watts had attained, one might almost say, the position of official historical painter to the State, a post coveted by the unfortunate Haydon; and he received a commission to paint a fresco of "St....