Water Baptism A Pagan and Jewish Rite but not Christian, Proven By Scripture And History Confirmed By The Lives Of Saints Who Were Never Baptized With Water 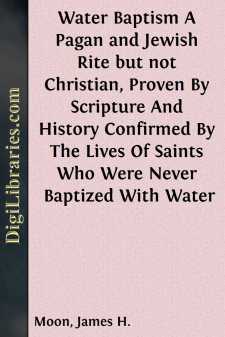 Did Christ command his disciples to baptize with water?

Let us search the New Testament and see what it says.

We find the four evangelists and Peter each render Christ's command to his apostles in very different language.

We cannot assume that in Matthew, our Saviour's words are quoted verbatim, while Mark, Luke, John and Peter are all in error or less reliable, particularly as this part of Matthew claims for itself to have been written a long time after, as appears by the statement that "This saying is commonly reported among the Jews until this day."

Seven different accounts of the "apostolic commission" are given in the New Testament.

Did not each of these writers express in his own language what he understood to be Christ's command to his disciples and will not these seven different records all agree in substance if genuine?

Let us seek that interpretation which harmonizes them all and not pin our faith to the popular conception of one version alone.

We will turn first to the one only recorded allusion which our Saviour ever made to water baptism.

We here find that he commanded his apostles not to depart from Jerusalem, but to wait for the promise of the Father which, said he, ye have heard of me; for John truly baptised with water, but ye shall be baptized with the Holy Spirit not many days hence.

Ye shall receive power when the Holy Spirit is come upon you, and ye shall be witnesses unto me both in Jerusalem and in all Judea and Samaria and to the uttermost parts of the earth.

These are given as the last words of our Saviour before his ascension. He speaks of John's baptism as the water baptism of the past, and of Holy Spirit baptism as the baptism of the future. By this Holy Spirit baptism his apostles are to receive power to become his witnesses to the uttermost parts of the earth. There is nothing whatever which implies a command to baptize with water. This whole context militates against the belief that Christ ever gave such command.

This version of the "apostolic commission" stands prominent and is worthy of double consideration because it is sustained by the testimony of Peter, who remembered these words of our Lord, and quoted from them as being fulfilled when the Holy Spirit was poured out upon the household of Cornelius as he preached.

According to John's account of the commission, Christ said to his apostles, "As my Father hath sent Me even so send I you," and we read that He was sent to baptize with the Holy Spirit. Again, He commanded them to feed his lambs and feed his sheep.

John never intimates that they were sent to baptize with water.

Had Christ commanded his disciples to baptize all nations with water, John would certainly have known it, and could not have failed to report a command of such world-wide application, John's silence is further evidence that no such command was given.

There can be no baptism in the commission other than the baptism of the Holy Spirit according to John's record as we have it.

According to Luke: Christ commanded his apostles to preach among all nations repentance and remission of sin in his name, after they should be endued with power from on high....