Watchers of the Sky 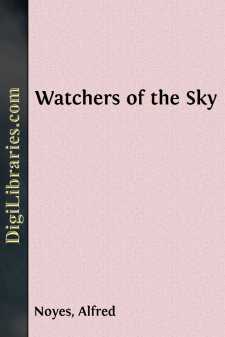 This volume, while it is complete in itself, is also the first of a trilogy, the scope of which is suggested in the prologue. The story of scientific discovery has its own epic unity—a unity of purpose and endeavour—the single torch passing from hand to hand through the centuries; and the great moments of science when, after long labour, the pioneers saw their accumulated facts falling into a significant order—sometimes in the form of a law that revolutionised the whole world of thought—have an intense human interest, and belong essentially to the creative imagination of poetry. It is with these moments that my poem is chiefly concerned, not with any impossible attempt to cover the whole field or to make a new poetic system, after the Lucretian model, out of modern science.

The theme has been in my mind for a good many years; and the first volume, dealing with the "Watchers of the Sky," began to take definite shape during what was to me an unforgettable experience—the night I was privileged to spend on a summit of the Sierra Madre Mountains, when the first trial was made of the new 100-inch telescope. The prologue to this volume attempts to give a picture of that night, and to elucidate my own purpose.

The first tale in this volume plunges into the middle of things, with the revolution brought about by Copernicus; but, within the tale, partly by means of an incidental lyric, there is an attempt to give a bird's-eye view of what had gone before. The torch then passes to Tycho Brahe, who, driven into exile with his tables of the stars, at the very point of death hands them over to a young man named Kepler. Kepler, with their help, arrives at his own great laws, and corresponds with Galileo—the intensely human drama of whose life I have endeavoured to depict with more historical accuracy than can be attributed to much of the poetic literature that has gathered around his name. Too many writers have succumbed to the temptation of the cry, "e pur si muove!" It is, of course, rejected by every reliable historian, and was first attributed to Galileo a hundred years after his death. M. Ponsard, in his play on the subject, succumbed to the extent of making his final scene end with Galileo "frappant du pied la terre," and crying, "pourtant elle tourne." Galileo's recantation was a far more subtle and tragically complicated affair than that. Even Landor succumbed to the easy method of making him display his entirely legendary scars to Milton. If these familiar pictures are not to be found in my poem, it may be well for me to assure the hasty reader that it is because I have endeavoured to present a more just picture. I have tried to suggest the complications of motive in this section by a series of letters passing between the characters chiefly concerned. There was, of course, a certain poetic significance in the legend of "e pur si muove"; and this significance I have endeavoured to retain without violating historical truth.

In the year of Galileo's death Newton was born, and the subsequent sections carry the story on to the modern observatory again. The form I have adopted is a development from that of an earlier book, "Tales of the Mermaid Tavern" where certain poets and discoverers of another kind were brought together round a central idea, and their stories told in a combination of narrative and lyrical verse. "The Torch-Bearers" flowed all the more naturally into a similar form in view of the fact that Tycho Brahe, Kepler, and many other pioneers of science wrote a considerable number of poems. Those imbedded in the works of Kepler—whose blazing and fantastic genius was, indeed, primarily poetic—are of extraordinary interest. I was helped, too, in the general scheme by those constant meetings between science and poetry, of which the most famous and beautiful are the visit of Sir Henry Wotton to Kepler, and the visit of Milton to Galileo in prison....