Watch Yourself Go By 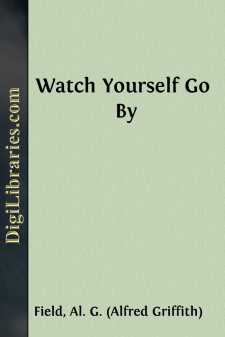 Trust no prayer or promise,Words are grains of sand;To keep your heart unbrokenHold your child in hand.

The last syllable, drawn out the length of an expiring breath, was the first sound recorded on the memory of the First Born. Indeed, constant repetition of the word, day to day, so filled his brain cells with "Al-f-u-r-d" that it was years after he realized his given patronymic was Alfred.

"Al-f-u-r-d!" "Al-f-u-r-d!"—A woman's voice, strong and penetrating, strengthened by years of voice culture in calling cows, sheep, pigs, chickens and other farm-yard companions. The voice came in swelling waves, growing in menace, from around the corner of as quaint an old farm-house as ever sheltered a happy family. In the wake of the voice followed a round, rosy woman of blood and brawn, with muscular arms and sturdy limbs that carried her over grass and gravel at a pace that soon brought her within reach of the prey pursued—a boy of four years, in flapping pantalets and gingham frock.

The "boy" was headed for the family well as fast as his toddling legs could carry him. Forbidden, punished, guarded, the child lost no opportunity to climb to the top of the square enclosure and wonderingly peer down into the depths of the well. To prevent his falling headlong to his death—a calamity frequently predicted—was the principal concern of all the family.

As the women folks were more often in the big kitchen than elsewhere, it became, as a matter of convenience, the daily prison of the First Born. The board, across the open doorway, and the eternal vigilance of his guards, did not prevent his starting several times daily on a pilgrimage towards the old well. The turning of a head, the absence of the guards from the kitchen for a moment, were the looked-for opportunities—crawling under or over the wooden bar, and starting in childish glee for the old well.

Previous to the time of this narrative, the race invariably resulted in the capture of "young hopeful" ere the well was reached. The shrill cry: "Al-f-u-r-d!" "Al-f-u-r-d!" always closely followed by the young woman who did the scouting for the other guards, brought him to a halt. He was lifted bodily, thrown high into the air, caught in strong, loving arms as he came down, roughly hugged and good-naturedly spanked, and carried triumphantly back to his prison—the kitchen. Here, seated upon the floor, he was roundly lectured by three women, who in turn charged one another with his escape. It was never his fault. Someone had turned a head to look at the clock, or the browning bread in the oven, turning to look at the cause of the controversy, not infrequently he was found astride the prison bar, or scampering down the path.

That old well, or its counterpart, was surely the inspiration of "The Old Oaken Bucket." However, their author was never imbued with fascination as alluring as that which influenced the First Born in his desire to solve the, to him, mystery of the old well.

The more his elders coaxed, bribed and threatened, the more vividly they depicted its dangers, the more determined he became to explore its darkened depths....