Watch-Work-Wait Or, The Orphan's Victory

by Sarah A. (Sarah Ann) Myers 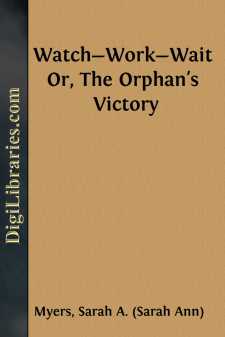 In one of the many beautiful spots which the traveller sees in making a voyage up the Hudson, stands the village of M——. It attracts the notice of all tourists, for it seems to occupy the very place in which a painter or a lover of the picturesque would have chosen to place it. Its inhabitants love to boast of its antiquity, for it was founded by the original Dutch settlers, and its present settlers are mostly their descendants.

At the time of which we write, no city fashions had found their way to that remote spot. Its inhabitants were simple-hearted, pious, and contented to live as their forefathers had done; and the place seemed like a quiet little world within itself. None of the gross vices always to be found in large communities were practised there. On the Sabbath-day, when its only bell sent its voice distinctly over the valley, the humble dwellers met in the single church, not only bound together by the tie of human brotherhood, but by the sweeter ties of Christian charity, to hear the word of God and perform the work of prayer and praise.

Just at the end of the long street in this quiet village stood a cottage, which, although very rudely built, attracted the attention of the passers-by from the extreme neatness and order, those sure attendants of the pious poor, which reigned around it. In winter it looked snug beneath its coating of snow; in summer very beautiful, glistening, as it then did, in all its fragrant adornment of jessamine, honeysuckle, and sweet-brier.

But if its exterior was attractive, the family life within was much more so. True piety and grace were found beneath that modest roof, most truly illustrating the truth, that the high and lofty One that inhabiteth eternity, whose name is Holy, who dwelleth in the high and holy place, dwelleth with him also that is of a contrite and humble spirit.

For many years this cottage had been occupied by a watchmaker, a German, who left his own country in early manhood, and came to the United States to find the wealth which foreigners used to believe could be gained here at once. This he never acquired, but he found something better; for although in an out-of-the-way place he could not expect to grow rich by his trade, he found a great treasure in his pious wife, and enjoyed more of pure and real happiness than often falls to the lot of man. His mind was originally one of strength, and he had turned his meditations and prayers heavenward, and the promised peace was vouchsafed.

He did not love his trade as well as he might have done; for having a very remarkable talent for painting and sketching, which the beautiful surroundings were well calculated to foster, he often found his business of watchmaking irksome. Although frugal, industrious, and possessing much skill as a seal engraver, in which art he received employment from New York, he never was able to lay up anything, although he could and did provide comfortably for his household.

His neighbours entertained for him a deep respect....