Watch and Wait or The Young Fugitives 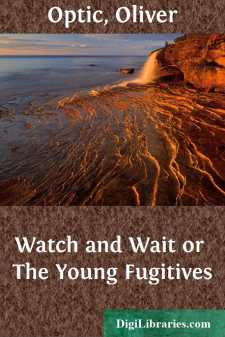 One soft summer evening, when Woodville was crowned with the glory and beauty of the joyous season, three strangers presented themselves before the Grant family, and asked for counsel and assistance. The party consisted of two boys and a girl, and they belonged to that people which the traditions of the past have made the "despised race;" but the girl was whiter and fairer than many a proud belle who would have scorned her in any other capacity than that of a servant; and one of the boys was very nearly white, while the other was as black as ebony undefiled. They were fugitives and wanderers from the far south-west; and the story which they told to Mr. Grant and his happy family will form the substance of this volume.

The plantation of Colonel Baylie Raybone was situated on one of the numerous bayous which form a complete network of water communications in the western part of the parish of Iberville, in the State of Louisiana. The "colonel," whose military title was only a courtesy accorded to his distinguished position, was a man of immense possessions, and consequently of large influence. His acres and his negroes were numbered by thousands, and he was largely engaged in growing sugar and rice. The estate on which he resided went by the name of Redlawn. His mansion was palatial in its dimensions, and was furnished in a style of regal magnificence.

The region in which Redlawn was situated was a low country, subject to inundation in the season of high water. The sugar plantation was located on a belt of land not more than a mile in width, upon the border of the bayou, which, contrary to the usual law, was higher ground than portions farther from the river. The lower lands were used for the culture of rice, which, our young readers know, must be submerged during a part of the year.

A short distance from the splendid mansion of the princely planter was a large village of negro huts, where the "people" of the estate resided. As Colonel Raybone was a liberal and progressive man, the houses of the negroes were far superior to those found upon many of the plantations of the South. They were well built, neatly white-washed, and no doubt the negroes who dwelt in them regarded it as a fortunate circumstance that they were the slaves of Colonel Raybone.

Along the front of the negro hamlet, and of the mansion house, ran the public highway, while in the rear of them, and at a distance of nearly half a mile, was the bayou, which was generally called the "Crosscut," because it joined two larger rivers. At the foot of a gravel walk, leading from the mansion down to the bayou, was a pier, upon which was built a tasty summer house, after the style of a Chinese pagoda, so that the planter and his family could enjoy the soft breezes that swept over the surface of the stream. There they spent many of their summer evenings; and truly it was a delightful place.

Fastened to the pier were several small boats, including a light wherry, and a four-oar race boat. Moored in the middle of the stream lay a large sail boat, in which the planter often made long trips for pleasure; for, by the network of rivers with which the bayou was connected, he could explore a vast tract of country, and even reach the Red River on the north, and the Gulf of Mexico on the south....