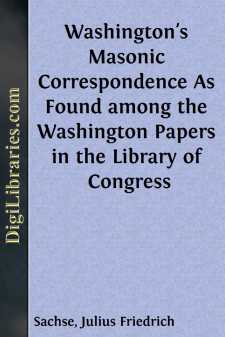 Washington's Masonic correspondence as found among the Washington papers in the Manuscript department of the Library of Congress, affords an insight of the great esteem in which Washington held the Masonic Fraternity, of which since his early days he had been an honored member.

This is further shown by his great courtesy to the Brethren, in his replies to their addresses, no matter whether they were from a Grand or Subordinate Lodge. In this collection, were also found some of the original drafts of Washington's replies, together with copies of the various masonic addresses and letters to him, and in the case of Dominie Snyder, press copies of his answers.

In the present work an attempt has been made to group this matter together in chronological order, also to show some of the surroundings and conditions under which this correspondence was made, and of the Brethren who were prominent in the presentation of these Eleven Addresses, which came to him from Seven of the Thirteen Colonies.

A complete set of photostatic fac-similes of these documents in the Library of Congress, has been secured for the Museum of the Grand Lodge of Pennsylvania. Efforts were also made to obtain photographic copies of such of the Washington Masonic letters as were still in existence, which were successful except in two instances as noted in the text.

It will be noted that on April 30, 1789, Washington, while Master of his Lodge, was inaugurated President of the United States; this is the only instance where one of the fourteen Presidents, who were Members of our Fraternity was a Master of a Lodge during their term as President.

The esteem in which Washington held the Masonic Fraternity, is shown by the fact, that in almost every case he had both the address and his reply, copied upon opposite pages of one of his folio letter-books, now in the Library of Congress. These copies are respectively in the handwriting of Washington's private secretaries, viz:—Major William Jackson: Tobias Lear: Bartholomew Dandridge and G. W. Craik.

In addition to the above copies we have Washington's original drafts of his letters to Watson and Cassoul, to the Grand Lodges of Massachusetts, South Carolina, and Maryland, to Paul Revere, and as before stated press copies of his answers to Mr. Snyder.

A perusal of these original documents, as here presented, affords an excellent illustration of the entente cordiale, which existed between Washington and his Masonic Brethren.

Upon the other hand, how the Masonic Fraternity, during Washington's lifetime, venerated their august Brother, is shown by the addresses of this correspondence as retained by Washington.

Also by the various Masonic Memorial services held, after Washington's death, the chief of which was in Philadelphia, under the auspices of the Grand Lodge of Pennsylvania. The Masonic services held in every State of the Union, the many Eulogies and Sermons delivered and printed are matters of history.

How this veneration of the great Washington continued during the past years, is shown by the fact that there are no less than 53 Masonic Lodges in the United States, named after the illustrious Brother....