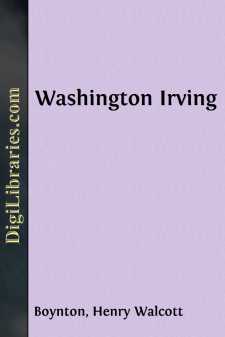 Irving's name stands as the first landmark in American letters. No other American writer has won the same sort of recognition abroad or esteem at home as became his early in life. And he has lost very little ground, so far as we can judge by the appeal to figures. The copyright on his works ran out long since, and a great many editions of Irving, cheap and costly, complete and incomplete, have been issued from many sources. Yet his original publishers are now selling, year by year, more of his books than ever before. There is little doubt that his work is still widely read, and read not because it is prescribed, but because it gives pleasure; not as the product of a "standard author," but as the expression of a rich and engaging personality, which has written itself like an indorsement across the face of a young nation's literature. It is that of a man so sensitive that the scornful finger of a child might have left him sleepless; so kindly that nobody ever applied to him in vain for sympathy; so modest that the smallest praise embarrassed him. His manner and tastes were simple and unassuming. He had no great passions; the brother was stronger in him than the lover. To these qualities, which might by themselves belong to ineffectiveness, he added courage, firmness, magnanimity. It was because he was such a man, and because what he was shines on every page he wrote, that the world still warms to him.

Not that so elusive a thing as personal charm can be neatly plotted by the card. We love certain people because we love them; and since that is so, everything they do is interesting to us. A great writer lives in his books, to be sure, but we want to know what he actually did in the flesh. Did he walk, eat, sleep, like other men? Was he as strong, as human, as lovable as one would think? What sort of boy was he? Did he marry a wife, and was she good enough for him? The world will never believe that such questions are impertinent.

There are, of course, more formal matters to be considered,—his debt to circumstance, his place in the practical world, his influence on the moral or intellectual or national life of his day. Some of these themes may be touched on, even within the narrow limits of the present sketch; not categorically, but rather by way of such suggestion and indirection as may be consistent with a compact narrative.

One of those apparent chances which are the commonplaces of history led William Irving from his far home in the Orkneys, married him to Sarah Sanders, and made him the father of Washington Irving. The Irvings—a branch of the well-known Scotch Irvines—had been for generations the leading family on the Island of Shapinsha. Finally they had gone threadbare, and with a fortune to seek, William Irving chose the natural ordeal for an islander, the trial by sea. Toward the close of the French War he had become petty officer on an armed English packet. In New York he met Mistress Sanders, who was also English-born, and in 1761 they were married....