Washington and His Comrades in Arms; a chronicle of the War of Independence 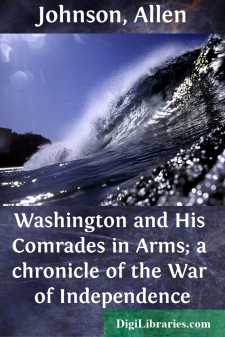 CHAPTER I. THE COMMANDER-IN-CHIEF

Moving among the members of the second Continental Congress, which met at Philadelphia in May, 1775, was one, and but one, military figure. George Washington alone attended the sittings in uniform. This colonel from Virginia, now in his forty-fourth year, was a great landholder, an owner of slaves, an Anglican churchman, an aristocrat, everything that stands in contrast with the type of a revolutionary radical. Yet from the first he had been an outspoken and uncompromising champion of the colonial cause. When the tax was imposed on tea he had abolished the use of tea in his own household and when war was imminent he had talked of recruiting a thousand men at his own expense and marching to Boston. His steady wearing of the uniform seemed, indeed, to show that he regarded the issue as hardly less military than political.

The clash at Lexington, on the 19th of April, had made vivid the reality of war. Passions ran high. For years there had been tension, long disputes about buying British stamps to put on American legal papers, about duties on glass and paint and paper and, above all, tea. Boston had shown turbulent defiance, and to hold Boston down British soldiers had been quartered on the inhabitants in the proportion of one soldier for five of the populace, a great and annoying burden. And now British soldiers had killed Americans who stood barring their way on Lexington Green. Even calm Benjamin Franklin spoke later of the hands of British ministers as "red, wet, and dropping with blood." Americans never forgot the fresh graves made on that day. There were, it is true, more British than American graves, but the British were regarded as the aggressors. If the rest of the colonies were to join in the struggle, they must have a common leader. Who should he be?

In June, while the Continental Congress faced this question at Philadelphia, events at Boston made the need of a leader more urgent. Boston was besieged by American volunteers under the command of General Artemas Ward. The siege had lasted for two months, each side watching the other at long range. General Gage, the British Commander, had the sea open to him and a finely tempered army upon which he could rely. The opposite was true of his opponents. They were a motley host rather than an army. They had few guns and almost no powder. Idle waiting since the fight at Lexington made untrained troops restless and anxious to go home. Nothing holds an army together like real war, and shrewd officers knew that they must give the men some hard task to keep up their fighting spirit. It was rumored that Gage was preparing an aggressive movement from Boston, which might mean pillage and massacre in the surrounding country, and it was decided to draw in closer to Boston to give Gage a diversion and prove the mettle of the patriot army. So, on the evening of June 16, 1775, there was a stir of preparation in the American camp at Cambridge, and late at night the men fell in near Harvard College.

Across the Charles River north from Boston, on a peninsula, lay the village of Charlestown, and rising behind it was Breed's Hill, about seventy-four feet high, extending northeastward to the higher elevation of Bunker Hill....