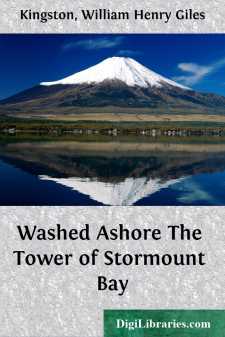 There was an old grey weather-beaten stone tower standing on the top of a high rocky promontory, which formed the western side of a deep bay, on the south coast of England. The promontory was known as the Stormy Mount, which had gradually been abbreviated into Stormount, a very appropriate name, for projecting, as it did, boldly out into the ocean, many a fierce storm had, age after age, raged round its summit and hurled the roaring, curling waves into masses of foam against its base, while the white spray flew in showers far above its topmost height. To the west of Stormount, the coast was rocky and fringed by numerous reefs, while on the further side of the bay, also formed by a promontory, less in height than that of Stormount, it consisted of cliffs, broken considerably however by chines and other indentations, and pierced here and there by caverns, some close down to the water, and others high up and almost inaccessible from below. Inland, the country was sparsely cultivated—open downs and fern and gorse-covered heaths prevailing. The more sheltered nooks in the bay contained a few fishermen’s cottages, pitched here and there wherever the ground favoured their erection, with very little regard to symmetry or order. Nearer to the water were boat-sheds, and stakes, and spars, on which nets were spread to dry or to be repaired.

But the old stone tower of Stormount claims our attention. It was of considerable circumference, three stories in height, the walls massive and substantial, the strongest gales could not shake it, nor any blasts find entrance. The tower had been the donjon-keep of the ancient castle, part of the wall of which attached to the tower, had of late years been roofed over, and formed a portion of a dwelling-house and offices, the main portion being in the keep itself. The appearance of the tower from the outside, though highly picturesque, was bleak and comfortless, and gave a stranger the idea that it was more fitted for the habitation of sea-gulls and other wild fowl, than for the abode of man. But those who had once entered within its portal came out with a very different notion. And on a stormy, long winter night, when the wind whistled and the waves roared, and all was darkness around, and the entrance to the bay, easily enough seen in daylight, was difficult to be found, a bright light streamed forth from an upper window of the old tower, sending its rays far off over the troubled ocean, cheering the passers by, a warning to some of neighbouring dangers, a guide and welcome to those who might be seeking shelter from the gale.

People are occasionally met with in this world very like that old tower—rough and weather-beaten on the outside, yet with warm hearts and genial dispositions, cheering and encouraging the wanderer, blessings to all with whom they come into contact. The old tower was inhabited, and about its inmates we have still more to say than about the tower itself. Five miles to the eastward of the tower was a Revenue Station, and fifteen years or so before the time of our history commences, the command was held by an old Lieutenant Cumming, who had obtained it, he used with a touch of satire to tell his friends, as a recompense for forty years’ services and numerous wounds in fighting his country’s battles....