Warwick Woodlands Things as they Were There Twenty Years Ago 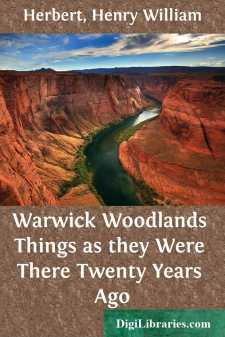 MY FIRST VISIT, DAY THE FIRST

It was a fine October evening when I was sitting on the back stoop of his cheerful little bachelor's establishment in Mercer street, with my old friend and comrade, Henry Archer. Many a frown of fortune had we two weathered out together; in many of her brightest smiles had we two reveled--never was there a stauncher friend, a merrier companion, a keener sportsman, or a better fellow, than this said Harry; and here had we two met, three thousand miles from home, after almost ten years of separation, just the same careless, happy, dare-all do-no-goods that we were when we parted in St. James's street,--he for the West, I for the Eastern World--he to fell trees, and build log huts in the backwoods of Canada,--I to shoot tigers and drink arrack punch in the Carnatic. The world had wagged with us as with most others: now up, now down, and laid us to, at last, far enough from the goal for which we started--so that, as I have said already, on landing in New York, having heard nothing of him for ten years, whom the deuce should I tumble on but that same worthy, snugly housed, with a neat bachelor's menage, and every thing ship-shape about him?--So, in the natural course of things, we were at once inseparables.

Well--as I said before, it was a bright October evening, with the clear sky, rich sunshine, and brisk breezy freshness, which indicate that loveliest of the American months,--dinner was over, and with a pitcher of the liquid ruby of Latour, a brace of half-pint beakers, and a score --my contribution--of those most exquisite of smokables, the true old Manila cheroots, we were consoling the inward man in a way that would have opened the eyes, with abhorrent admiration, of any advocate of that coldest of comforts--cold water--who should have got a chance peep at our snuggery.

Suddenly, after a long pause, during which he had been stimulating his ideas by assiduous fumigation, blowing off his steam in a long vapory cloud that curled a minute afterward about his temples,--"What say you, Frank, to a start tomorrow?" exclaimed Harry,--"and a week's right good shooting?"

"Why, as for that," said I, "I wish for nothing better--but where the deuce would you go to get shooting?"

"Never fash your beard, man," he replied, "I'll find the ground and the game too, so you'll find share of the shooting!--Holloa! there--Tim, Tim Matlock."

And in brief space that worthy minister of mine host's pleasures made his appearance, smoothing down his short black hair, clipped in the orthodox bowl fashion, over his bluff good-natured visage with one hand, while he employed its fellow in hitching up a pair of most voluminous unmentionables, of thick Yorkshire cord.

A character was Tim--and now I think of it, worthy of brief description. Born, I believe--bred, certainly, in a hunting stable, far more of his life passed in the saddle than elsewhere, it was not a little characteristic of my friend Harry to have selected this piece of Yorkshire oddity as his especial body servant; but if the choice were queer, it was at least successful, for an honester, more faithful, hard-working, and withal, better hearted, and more humorous varlet never drew curry-comb over horse-hide, or clothes-brush over broad-cloth....