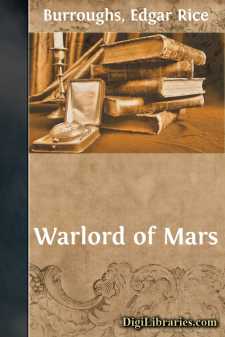 ON THE RIVER ISS

In the shadows of the forest that flanks the crimson plain by the side of the Lost Sea of Korus in the Valley Dor, beneath the hurtling moons of Mars, speeding their meteoric way close above the bosom of the dying planet, I crept stealthily along the trail of a shadowy form that hugged the darker places with a persistency that proclaimed the sinister nature of its errand.

For six long Martian months I had haunted the vicinity of the hateful Temple of the Sun, within whose slow-revolving shaft, far beneath the surface of Mars, my princess lay entombed—but whether alive or dead I knew not. Had Phaidor's slim blade found that beloved heart? Time only would reveal the truth.

Six hundred and eighty-seven Martian days must come and go before the cell's door would again come opposite the tunnel's end where last I had seen my ever-beautiful Dejah Thoris.

Half of them had passed, or would on the morrow, yet vivid in my memory, obliterating every event that had come before or after, there remained the last scene before the gust of smoke blinded my eyes and the narrow slit that had given me sight of the interior of her cell closed between me and the Princess of Helium for a long Martian year.

As if it were yesterday, I still saw the beautiful face of Phaidor, daughter of Matai Shang, distorted with jealous rage and hatred as she sprang forward with raised dagger upon the woman I loved.

I saw the red girl, Thuvia of Ptarth, leap forward to prevent the hideous deed.

The smoke from the burning temple had come then to blot out the tragedy, but in my ears rang the single shriek as the knife fell. Then silence, and when the smoke had cleared, the revolving temple had shut off all sight or sound from the chamber in which the three beautiful women were imprisoned.

Much there had been to occupy my attention since that terrible moment; but never for an instant had the memory of the thing faded, and all the time that I could spare from the numerous duties that had devolved upon me in the reconstruction of the government of the First Born since our victorious fleet and land forces had overwhelmed them, had been spent close to the grim shaft that held the mother of my boy, Carthoris of Helium.

The race of blacks that for ages had worshiped Issus, the false deity of Mars, had been left in a state of chaos by my revealment of her as naught more than a wicked old woman. In their rage they had torn her to pieces.

From the high pinnacle of their egotism the First Born had been plunged to the depths of humiliation. Their deity was gone, and with her the whole false fabric of their religion. Their vaunted navy had fallen in defeat before the superior ships and fighting men of the red men of Helium.

Fierce green warriors from the ocher sea bottoms of outer Mars had ridden their wild thoats across the sacred gardens of the Temple of Issus, and Tars Tarkas, Jeddak of Thark, fiercest of them all, had sat upon the throne of Issus and ruled the First Born while the allies were deciding the conquered nation's fate....