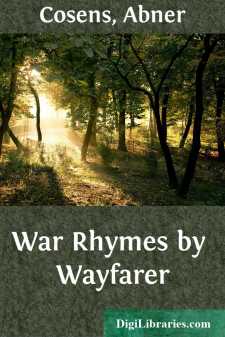 The reader of this booklet is not expected to agree with everything in it. The rhymes express only the impressions made on the writer at the time by the varied incidents and conditions arising out of the great war, and some of them did not apply when circumstances changed.

They have been printed as written, however, and, if they serve no other purpose, may at least help us to recall some things that too soon have nearly passed out of our minds.

The outbreak of hostilities, the invasion of Belgium, the Old Land in it and the rush of the British born to enlist, the early indifference of the majority of Canadians, the unemployment and distress of the winter of 1914-15, the heartlessness of Germany, Canada stirred by the valor of her first battalions, recruiting general throughout the country, the slackness of the United States, financial and political profiteering in all countries, smaller European nations playing for position, Italy joining the Allies, the debacle of Russia, the awful casualty lists, the return of disabled soldiers, the ceaseless war work of our women, the United States at last declaring war on Germany, the final line up and defeat of the Hun, and the horror and apparent uselessness of it all; some reflection of all these may be found by the reader in these simple rhymes.

MODERN DIPLOMACY, OR HOW THE WAR STARTED August, 1914 Said Austria,—"You murderous Serb,You the peace of all Europe disturb;Get down on your knees,And apologize, please,Or I'll kick you right off my front curb." Said Serbia,—"Don't venture too far,Or I'll call in my uncle, the Czar;He won't see me licked,Nor insulted, nor kicked,So you better leave things as they are." Said the Kaiser,—"That Serb's a disgrace.We must teach him to stay in his place,If Russia says boo,I'm in the game, too,And right quickly we'll settle the case." The Czar said,—"My cousin the Kaiser,Was always a good advertiser;He's determined to fight,And insists he is right,But soon he'll be older and wiser." "For forty-four summers," said France,"I have waited and watched for a chanceTo wrest Alsace-LorraineFrom the Germans again,And now is the time to advance." Said Belgium,—"When armies immensePour over my boundary fence,I'll awake from my nap,And put up a scrapThey'll remember a hundred years hence." Said John Bull,—"This 'ere Kaiser's a slob,And 'is word isn't worth 'arf a bob,(If I lets Belgium suffer,I'm a blank bloomin' duffer)So 'ere goes for a crack at 'is nob." Said Italy,—"I think I'll stay out,Till I know what this row is about;It's a far better plan,Just to sell my banan',Till the issue is plain beyond doubt." Said our good uncle Samuel, "I swaowI had better keep aout of this raow,For with Mormons, and Niggers,And Greasers, I figgersI have all I kin handle just naow." THE ALLIED FORCES November, 1914 When Johnnie Bull pledges his word,To keep it he'll gird on his sword,While allies and sonsWill shoulder their guns;The prince, and the peasant, and lord. First there's bold Tommy Aitkins himself,For a shilling a day of poor pelf,And for love of his King,And the fun of the thing,He fights till he's laid on the shelf. Brave Taffy is ready to goAs soon as the war bugles blow;He fights like the diel,When it comes to cold steel,And dies with his face to the foe. And Donald from North Inverness,Who fights in a ballet girl's dress;He likes a free limb,No tight skirts for him,Impending his march to success. The gun runner, stern, from Belfast,Now stands at the head of the mast;If a tempest should come,Or a mine or a bomb,He will stick to his post to the last. And Hogan, that broth of a lad,Home Ruler from Bally-na-fad,Writes—"I'm now in the trenchWith the English and French,And we're licking the Germans, be dad!" The Cockney Canuck from Toronto,Whom Maple leaves hardly stick on to,Made haste to enlist,To fight the mailed fist,When Canadian born didn't want to. From where the wide-winged albatrossFloats white 'neath the Southern Cross,There came the swift cruisers,And Germans are losers;Australians want no Kaiser boss. From sheep run, pine forest and fern,The stalwart New Zealanders turnTo the land of their sires,For with ancestral firesTheir bosoms in ardor still burn....
Show more
Show less