War from the Inside The Story of the 132nd Regiment Pennsylvania Volunteer Infantry in the War for the Suppression of the Rebellion, 1862-1863 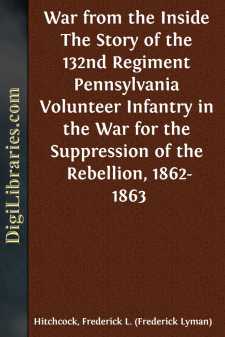 FIRST LESSONS; OR, DOING THE IMPOSSIBLE

I was appointed adjutant of the One Hundred and Thirty-second Regiment, Pennsylvania Volunteers, by our great war Governor, Andrew G. Curtin, at the solicitation of Colonel Richard A. Oakford, commanding the regiment, my commission dating the 22d day of August, 1862. I reported for duty to Colonel Oakford at Camp Whipple, where the regiment was then encamped, on the 3d day of September, 1862. This was immediately following the disasters of "Chantilly" and "Second Bull Run," and as I passed through Washington to Camp Whipple, I found the greatest excitement prevailing because of these reverses, and a general apprehension for the safety of the capital in consequence. The wildest rumors were abroad concerning the approach of the victorious rebel troops, and an alarm amounting almost to a panic existed. Being without a horse or other means of transportation, I was obliged to make my way, valise in hand, on foot from Washington over the "long bridge" across the Potomac, to Camp Whipple, some two miles up the river nearly opposite Georgetown. From the wild rumors floating about Washington, I did not know but I should be captured bag and baggage before reaching camp. Undertaking this trip under those circumstances, I think, required almost as much nerve as "real work" did later on.

Getting beyond the long bridge there were abundant evidences of the reported disasters. Straggling troops, army wagons, etc., were pouring in from the "front" in great disorder. I reached camp about three o'clock P.M. and found Colonel Oakford out with the regiment on battalion drill. An hour later I reported to his office (tent) as ready for duty. The colonel had been a lifelong personal friend, and I was received, as I expected, most cordially. I was assigned quarters, and a copy of the daily routine orders of camp was placed in my hands, and my attention specially called to the fact that the next "order of business" was "dress parade" at six o'clock. I inquired the cause of this special notice to me, and was informed that I was expected to officiate as adjutant of the regiment at that ceremony. I pleaded with the colonel to be allowed a day or so in camp to see how things were done before undertaking such difficult and important duties; that I knew absolutely nothing about any part of military service; had never served a day in any kind of military work, except in a country fire company; had never seen a dress parade of a full regiment in my life, and knew nothing whatever about the duties of an adjutant.

My pleadings were all in vain. The only reply I received was a copy of the "Army Regulations," with the remark that I had two hours in which to study up and master the details of dress parade, and that I could not learn my duties any easier nor better than by actual practice; that my condition was no different from that of my fellow officers; that we were all there in a camp of instruction learning our duties, and there was not a moment to lose. I then began to realize something of the magnitude of the task which lay before me....