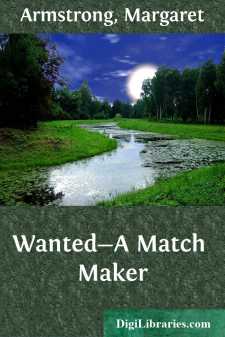 "You understand, Josie, that I wouldn't for a moment wish Constance to marry without being in love, but—"

Mrs. Durant hesitated long enough to convey the inference that she was unfeminine enough to place a value on her own words, and then, the pause having led to a change, or, at least, modification of what had almost found utterance, she continued, with a touch of petulance which suggested that the general principle had in the mind of the speaker a special application, "It is certainly a great pity that the modern girl should be so unimpressionable!"

"I understand and sympathise with you perfectly, dear," consolingly acceded Mrs. Ferguson. "And Constance has such advantages!"

Quite unnoting that her friend replied to her thought rather than to her words, Mrs. Durant responded at once eagerly, yet defensively: "That is it. No one will deny that Muriel is quite Constance's equal in mind, and, though perhaps I am not the one to say it, Doris surely excels her in looks. Don't you think so, darling?" she added.

"Unquestionably," agreed the friend, with much the quality of firm promptness with which one would bolt a nauseous pill, or extrude an ailing oyster.

"Yet merely because Constance has been out so much longer, and therefore is much more experienced, she self—she monopolises the attentions of the men; you know she does, Josie."

"Absolutely," once more concurred Mrs. Ferguson; and this time, though she spoke less quickly, her tone carried greater conviction. "They are—well—she—she undoubtedly—that is, she contrives—somehow—to eclipse, or at least overshadow them."

"Exactly. I don't like to think that she manages—but whether she does or not, the results are as bad as if she did; and thoughtlessness—if it is only that, which I can't believe—is quite as blamable as—as more intentional scheming."

"Then of course," said Mrs. Ferguson, "every one knows about her mother's fortune—and men are so mercenary in these days."

"Oh, Josie, I don't like to speak of that myself, but it is such a relief to have you say it. That is the whole trouble. What sort of a chance have my poor dears, who will inherit so little compared to her wealth, and that not till—till we are through with it—against Constance? I call it really shameful of her to keep on standing in their light!"

"That is the cruelty of my position," moaned Mrs. Durant. "I should not hesitate a moment, but the world is so ill-natured about stepmothers that one has to be over-careful, and with daughters of my own, I'm afraid people—perhaps my own husband—would think I was trying to sacrifice her to them."

"But have you no friend you could ask to—?"

"Josie! Would you?" eagerly interrupted Mrs. Durant. "She will be influenced, I know, by anything you—"

"Gracious, my dear, I never dreamed of—of you asking me! Why, I don't know her in the least. I couldn't, really."