Wanderings in the Orient 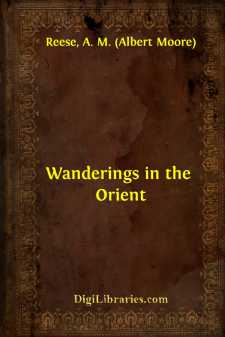 I. LIFE IN A PHILIPPINE VILLAGE.

The little village or barrio of Mariveles is situated just inside the narrow cape that forms the northern border of the entrance to Manila Bay. The city of Manila lies out of sight, thirty miles to the southeast, but the island of Corregidor lies only seven miles to the south, and the great searchlights at night are quite dazzling when turned directly upon the village. A large amount of money has recently been spent in fortifying Corregidor until it is now considered practically impregnable.

The village extends for about half a mile close along the beach and is flanked, on the west, by the buildings of a United States quarantine station.

Arriving by a very dilapidated launch from Manila I waited at the government dock while the native boy I had brought with me went to the village to find, if possible, a vacant house. He soon returned, with another boy to help carry our baggage, (there was not a cart or wagon of any sort in the place) and with the information that he had engaged a house for our use. A whole house for two people sounded rather formidable but as this house contained only two rooms its rental was not as extravagant as might have been imagined. It was located on the main thoroughfare which had the very American name of Washington Street. Like the typical native house, our Washington Street mansion was built chiefly of bamboo and nipa palm, with a few heavier timbers in the framework. Upon the main timbers of the frame was built a sort of lattice of split bamboo, upon which in turn was sewed, shinglewise, close layers of nipa palm that are quite impervious to rain, are fairly durable, and are very inflammable. The people's floor was elevated four or five feet above the ground, thereby securing not only air and dryness for the people above, but also providing a very convenient chicken-coop and pig-pen beneath. The floor was made of split bamboo which made sweeping easy—merely a matter of pushing the dirt through the cracks between the strips of bamboo.

Although the smell of even a clean pig under the dining-room table is rather objectionable at first, as is the crowing of two or three roosters early in the morning, it is surprising how soon one becomes accustomed to these little annoyances, and it simplifies domestic science considerably to be able to throw, from one's seat at table, banana skins and other scraps through a convenient hole in the floor and have them immediately disposed of by the pig and chickens beneath.

OUR RESIDENCE ON "WASHINGTON STREET."

The dining room, as in many American houses, also served as a kitchen. The stove was a large box, elevated two or three feet from the floor, lined with baked clay upon which the fire is made. Large iron spikes, arranged in groups of three, may be imbedded in the clay to hold one or more pots of different sizes. There was no chimney, but a convenient window carried out the smoke quite effectively. The fire-wood was stored under the house in the pig-pen and consisted chiefly of short sticks of such diameter as could be easily cut with the large knife or bolo that the natives wear suspended from a belt at the waist....