Walter and the Wireless 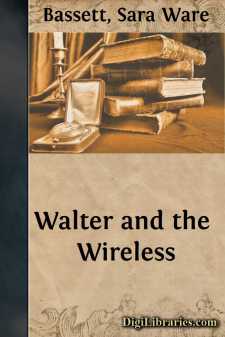 CHAPTER I HIS HIGHNESS

His Highness came by the nickname honestly enough and yet those who heard it for the first time had difficulty in repressing a smile at the incongruity of the title. In fact perhaps no term could have been found that would have been less appropriate. For Walter King possessed neither dignity of rank nor of stature. On the contrary he was a short, snub-nosed boy of fifteen, the epitome of good humor and democracy.

His hair was red and towsled, his face spangled with great golden freckles which sea winds and sunshine had multiplied until there was scarce room for another on his beaming countenance. Hands and arms were freckled too, for when one lives in a bathing suit six months of the year and is either in the water or on it most of the time the skin fails to retain its pristine whiteness of hue. But His Highness did not care a fig for that. He was far too busy baiting eel and lobster traps, mending fish nets, untangling lines, and painting boats to give a thought to his personal beauty.

Indeed his mother often bewailed the fact that he was not more interested in his appearance and there were times when it seemed as if she were right. Certainly when her son ambled home at dusk with every rebellious hair standing upended upon his head and a string of flounders dripping salt from the tips of their slimy tails she was justified to a degree in wishing he had more regard for the niceties of life.

"Look at the mess you're making!" she would pipe indignantly. "I've just mopped this floor, Walter."

"You have? Now isn't that the dickens! Well, no matter, Ma; I'll swab the place down again when I've finished cleaning these fish. They're beauties, aren't they? A batch of them fried won't go bad for supper to-night. I'm hungry as a bear. Shouldn't think I'd eaten anything in ten years. Say, Ma, what do you s'pose? Dave Corbett was out in the Nancy three hours and never got a bite. What do you think of that? The wind died down, his engine got stalled, and he and Hosey Talbot had to row home from the Bell Reef Shoals. Haw, haw! Maybe I didn't roar when I saw them come pulling in against the tide, mad as two man-eating sharks. Fit to harpoon the first person they met, they were. I sung out and asked them were they practicing for the Harvard and Yale boat race and Dave was that peeved he shied an oarlock after me. Haw, haw, haw!"

"You ought not to provoke Dave, Walter."

"Provoke him? But he was provoked already, Ma. There's no harm putting an extra stick on the fire when it's burning, anyhow. Besides, Dave is never in earnest when he bawls me out. He just likes to hear himself scold."

"He has a terrible temper."

"Oh, I know half the town is scart to death of him. But he always will take a jolly from me. We understand each other, Dave and I. Say, Ma, these rubber boots leak. Did you know that? Yes, siree! They leak like sieves. I might as well be without 'em."

"I don't see," murmured she, "how you manage to go through everything you have so quickly, Walter....