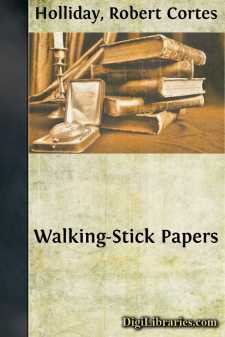 Canes are carried in all parts of the world, and have been carried—or that which was the forefather of them has been carried—since human history began. Indeed, a very fair account of mankind might be made by writing the story, of its canes. And nothing that would readily occur to mind would more eloquently express a civilisation than its evident attitude toward canes. Perhaps nothing can more subtly convey the psychology of a man than his feeling about a cane.

The prehistoric ape, we are justified in assuming, struggled upright upon a cane. The cane, so to speak, with which primitive man wooed his bride, defended his life, liberty and pursuit of happiness, and brought down his food, was (like all canes which are in good taste) admirably chosen for the occasion. The spear, the stave, the pilgrim's staff, the sword, the sceptre—always has the cane-carrying animal borne something in his hand. And, down the long vista of the past, the cane, in its various manifestations, has ever been the mark of strength, and so of dignity. Thus as a man originally became a gentleman, or a king, by force of valour, the cane in its evolution has ever been the symbol of a superior caste.

A man cannot do manual labour carrying a cane. And it would be a moral impossibility for one of servile state—a butler, for instance, or a ticket-chopper—to present himself in the role of his occupation ornamented with a cane. One held in custody would not be permitted to appear before a magistrate flaunting a cane. Until the stigma which attaches to his position may be erased he would be shorn of this mark of nobility, the cane.

Canes are now carried mostly by the very youthful and the very aged, the powerful, the distinguished, the patrician, the self-important, and those who fancy to exalt themselves. Some, to whom this privilege is denied during the week by their fear of adverse public opinion, carry canes only on Sundays and holidays. By this it is shown that on these days they are their own masters.

Custom as to carrying canes varies widely in different parts of the world; but it may be taken as a general maxim that the farther west you go the less you see of canes. The instinct for carrying a cane is more natural in old civilisations, where the tradition is of ancient growth, than in newer ones, where frequently a cane is regarded as the sign of an effete character. As we have been saying, canes, we all feel, have an affinity with the idea of an aristocracy. If you do not admit that the idea of an aristocracy is a good one, then doubtless you are down on canes. It is interesting to observe that canes have flourished at all especially chivalrous periods and in all especially chivalrous communities. No illustrator would portray a young planter of the Old South without his cane; and that fragrant old-school figure, a southern "Colonel," without his cane is inconceivable....