Walker's Appeal, with a Brief Sketch of His Life And Also Garnet's Address to the Slaves of the United States of America 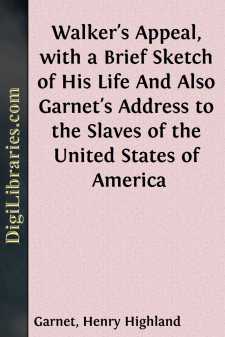 A BRIEF SKETCHOF THELIFE AND CHARACTER OF DAVID WALKER.

It is generally the desire of the reader of any intellectual production, to know something of the character and the life of the author. The character of David Walker is indicated in his writings. In regard to his life, but a few materials can be gathered; but what is known of him, furnishes proof to the opinion which the friends of man have formed of him—that he possessed a noble and a courageous spirit, and that he was ardently attached to the cause of liberty.

Mr. Walker was born in Wilmington, North Carolina, Sept. 28, 1785. His mother was a free woman, and his father was a slave. His innate hatred to slavery was very early developed. When yet a boy, he declared that the slaveholding South was not the place for him. His soul became so indignant at the wrongs which his father and his kindred bore, that he determined to find some portion of his country where he would see less to harrow up his soul. Said he, "If I remain in this bloody land, I will not live long. As true as God reigns, I will be avenged for the sorrow which my people have suffered. This is not the place for me—no, no. I must leave this part of the country. It will be a great trial for me to live on the same soil where so many men are in slavery; certainly I cannot remain where I must hear their chains continually, and where I must encounter the insults of their hypocritical enslaver. Go, I must."

The youthful Walker embraced his mother, and received a mother's blessings, and turned his back upon North Carolina. His father died a few months before his birth; and it is a remarkable coincidence, that the son of the subject of this Memoir, was a posthumous child.

After leaving home, David Walker travelled rapidly towards the North, shaking off the dust of his feet, and breathing curses upon the system of human slavery, America's darling institution. As might be expected, he met with trials during his journey; and at last he reached Boston, Mass., where he took up his permanent residence. There he applied himself to study, and soon learned to read and write, in order that he might contribute something to the cause of humanity. Mr. Walker, like most of reformers, was a poor man—he lived poor, and died poor.

In 1827 be entered into the clothing business in Brattle street, in which he prospered; and had it not been for his great liberality and hospitality, he would have become wealthy. In 1828, he married Miss Eliza ——. He was emphatically a self-made man, and he spent all his leisure moments in the cultivation of his mind. Before the Anti-Slavery Reformation had assumed a form, he was ardently engaged in the work. His hands were always open to contribute to the wants of the fugitive. His house was the shelter and the home of the poor and needy. Mr. Walker is known principally by his "Appeal," but it was in his private walks, and by his unceasing labors in the cause of freedom, that he has made his memory sacred.