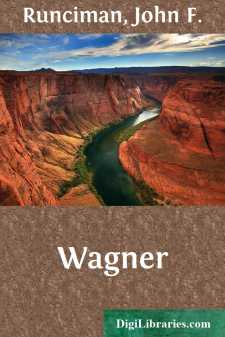 The old world is very remote from us now, but it is worth while making a small attempt to realize how it stood to Wagner. When he was born, in 1813, Bach had been dead only a little over sixty years; Mozart had been dead about twenty years, and Haydn about ten; Beethoven was in the full splendour of his tremendous powers; Weber and Schubert had still their finest work to do. To grasp all that this means, let us consider our relation to Mendelssohn. He died nearly sixty years ago; yet, whatever we may think of him as a composer, we can scarcely call him old-fashioned: he remains indisputably one of the moderns. Now, Wagner can never have looked upon Bach as a modern. He spoke of him and his old periwig almost as one might allude to an extinct race of animals. The history of an art cannot be measured off in years: in some periods it moves slowly, in others with startling rapidity. Since Mendelssohn's day composers have sought rather to develop old resources and forms than to find and create new ones, whereas in the sixty years that lie between Bach's death and Wagner's birth the whole form and content, the very stuff, of music was changed. In 1750 he would have been a daring and extraordinarily sapient being who prophesied that within forty years Mozart's G minor Symphony would be written. Between Bach and Wagner is a great gulf set, a gulf bridged by Emanuel Bach, Haydn, Mozart, and Beethoven; between ourselves and Mendelssohn there is no such chasm and certainly no such list of mighty names. It was in the period of swift transition from Bach's fugues to Beethoven's Choral Symphony that Wagner was born, a period when musical Germany was in a state of tumultuous ebullition. Later we shall see for how much this counted in the growth of Wagner's genius. In the meantime it may be observed that in externals the world of 1813 was not so far removed from the world of 1750. All the men on whose work Wagner was fed and brought up had their roots in a past that is now dead and buried. Had he been born a few years earlier he might have worn a wig; the stock was not to depart for many a year to come. A man might still, without causing remark, wear coats, waistcoats and trousers of many hues. The old world was going fast, but it had not gone. The fires of the French Revolution had cast strange lights amongst the peoples and struck a deadly chill into the hearts of kings and governors. Napoleon had shown what the will, brain and energy of a man could do, and all the forces of reaction were gathering together to crush him at Waterloo; the heads of men were seething with new ideas, destined to bring about the strangest results a few years afterwards; but the old order still prevailed, had not yet yielded to the new. Let us remember how short a time had passed since Haydn retired, after a life spent at a pig-tail German Court in the service of a princeling whose position was about as lofty as that of an English country squire, though it must be admitted that his tastes were a little more elevated....