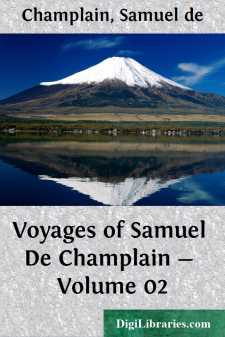 CHAPTER I. THE BENEFITS OF COMMERCE HAVE INDUCED SEVERAL PRINCES TO SEEK AN EASIER ROUTE FOR TRAFFIC WITH THE PEOPLE OF THE EAST.—SEVERAL UNSUCCESSFUL VOYAGES.—DETERMINATION OF THE FRENCH FOR THIS PURPOSE.—UNDERTAKING OF SIEUR DE MONTS: HIS COMMISSION AND ITS REVOCATION.—NEW COMMISSION TO SIEUR DE MONTS TO ENABLE HIM TO CONTINUE HIS UNDERTAKING.

The inclinations of men differ according to their varied dispositions; and each one in his calling has his particular end in view. Some aim at gain, some at glory, some at the public weal. The greater number are engaged in trade, and especially that which is transacted on the sea. Hence arise the principal support of the people, the opulence and honor of states. This is what raised ancient Rome to the sovereignty and mastery over the entire world, and the Venetians to a grandeur equal to that of powerful kings. It has in all times caused maritime towns to abound in riches, among which Alexandria and Tyre are distinguished, and numerous others, which fill up the regions of the interior with the objects of beauty and rarity obtained from foreign nations. For this reason, many princes have striven to find a northerly route to China, in order to facilitate commerce with the Orientals, in the belief that this route would be shorter and less dangerous.

In the year 1496, the king of England commissioned John Cabot and his son Sebastian to engage in this search. [1] About the same time, Don Emanuel, king of Portugal, despatched on the same errand Gaspar Cortereal, who returned without attaining his object. Resuming his journeys the year after, he died in the undertaking; as did also his brother Michel, who was prosecuting it perseveringly. [2] In the years 1534 and 1535, Jacques Cartier received a like commission from King Francis I., but was arrested in his course. [3] Six years after, Sieur de Roberval, having renewed it, sent Jean Alfonse of Saintonge farther northward along the coast of Labrador; [4] but he returned as wise as the others. In the years 1576, 1577, and 1578, Sir Martin Frobisher, an Englishman, made three voyages along the northern coasts. Seven years later, Humphrey Gilbert, also an Englishman, set out with five ships, but suffered shipwreck on Sable Island, where three of his vessels were lost. In the same and two following years, John Davis, an Englishman, made three voyages for the same object; penetrating to the 72d degree, as far as a strait which is called at the present day by his name. After him, Captain Georges made also a voyage in 1590, but in consequence of the ice was compelled to return without having made any discovery. [5] The Hollanders, on their part, had no more precise knowledge in the direction of Nova Zembla.

So many voyages and discoveries without result, and attended with so much hardship and expense, have caused us French in late years to attempt a permanent settlement in those lands which we call New France, [6] in the hope of thus realizing more easily this object; since the voyage in search of the desired passage commences on the other side of the ocean, and is made along the coast of this region....