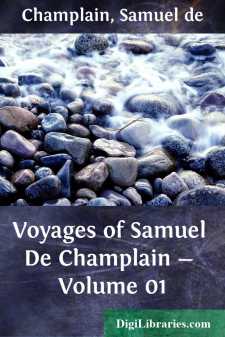 Champlain was descended from an ancestry whose names are not recorded among the renowned families of France. He was the son of Antoine de Champlain, a captain in the marine, and his wife Marguerite LeRoy. They lived in the little village of Brouage, in the ancient province of Saintonge. Of their son Samuel, no contemporaneous record is known to exist indicating either the day or year of his birth. The period at which we find him engaged in active and responsible duties, such as are usually assigned to mature manhood, leads to the conjecture that he was born about the year 1567. Of his youth little is known. The forces that contributed to the formation of his character are mostly to be inferred from the abode of his early years, the occupations of those by whom he was surrounded, and the temper and spirit of the times in which he lived.

Brouage is situated in a low, marshy region, on the southern bank of an inlet or arm of the sea, on the southwestern shores of France, opposite to that part of the Island of Oleron where it is separated from the mainland only by a narrow channel. Although this little town can boast a great antiquity, it never at any time had a large population. It is mentioned by local historians as early as the middle of the eleventh century. It was a seigniory of the family of Pons. The village was founded by Jacques de Pons, after whose proper name it was for a time called Jacopolis, but soon resumed its ancient appellation of Brouage.

An old chronicler of the sixteenth century informs us that in his time it was a port of great importance, and the theatre of a large foreign commerce. Its harbor, capable of receiving large ships, was excellent, regarded, indeed, as the finest in the kingdom of France. [1] It was a favorite idea of Charles VIII. to have at all times several war-ships in this harbor, ready against any sudden invasion of this part of the coast.

At the period of Champlain's boyhood, the village of Brouage had two absorbing interests. First, it had then recently become a military post of importance; and second, it was the centre of a large manufacture of salt. To these two interests, the whole population gave their thoughts, their energy, and their enterprise.

In the reign of Charles IX., a short time before or perhaps a little after the birth of Champlain, the town was fortified, and distinguished Italian engineers were employed to design and execute the work. [2] To prevent a sudden attack, it was surrounded by a capacious moat. At the four angles formed by the moat were elevated structures of earth and wood planted upon piles, with bastions and projecting angles, and the usual devices of military architecture for the attainment of strength and facility of defence....