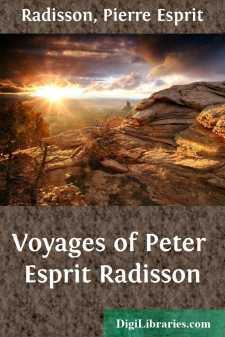 The author of the narratives contained in this volume was Peter Esprit Radisson, who emigrated from France to Canada, as he himself tells us, on the 24th day of May, 1651. He was born at St. Malo, and in 1656, at Three Rivers, in Canada, married Elizabeth, the daughter of Madeleine Hainault. [Footnote: Vide History of the Ojibways, by the Rev. E. D. Neill, ed. 1885.] Radisson says that he lived at Three Rivers, where also dwelt "my natural parents, and country-people, and my brother, his wife and children." [Footnote: The Abbe Cyprian Tanguay, the best genealogical authority in Canada, gives the following account of the family: Francoise Radisson, a daughter of Pierre Esprit, married at Quebec, in 1668, Claude Volant de St. Claude, born in 1636, and had eight children. Pierre and Claude, eldest sons, became priests. Francoise died in infancy: Marguerite married Noel le Gardeur; Francoise died in infancy; Etienne, born October 29, 1664, married in 1693 at Sorel, but seems to have had no issue. Jean Francois married Marguerite Godfrey at Montreal in 1701. Nicholas, born in 1668, married Genevieve Niel, July 30, 1696, and both died in 1703, leaving two of their five sons surviving.

There are descendants of Noel le Gardeur who claim Radisson as theirancestor, and also descendants of Claude Volant, apparently throughNicholas. Among these descendants of the Volant family is the Rt. Rev.Joseph Thomas Duhamel, who was consecrated Bishop of Ottawa, Canada,October 28, 1874.

Of Medard Chouart's descendants, no account of any of the progeny of his son Jean Baptiste, born July 25, 1654, can be found.] This brother, often alluded to in Radisson's narratives as his companion on his journeys, was Medard Chouart, "who was the son of Medard and Marie Poirier, of Charly St. Cyr, France, and in 1641, when only sixteen years old, came to Canada." [Footnote: Chouart's daughter Marie Antoinette, born June 7, 1661, married first Jean Jalot in 1679. He was a surgeon, born in 1648, and killed by the Iroquois, July 2, 1690. He was called Des Groseilliers. She had nine children by Jalot, and there are descendants from them in Canada. On the 19th December, 1695, she married, secondly, Jean Bouchard, by whom she had six children. The Bouchard-Dorval family of Montreal descends from this marriage. Vide Genealogical Dictionary of Canadian Families, Quebec, 1881.] He was a pilot, and married, 3rd September, 1647, Helen, the daughter of Abraham Martin, and widow of Claude Etienne. Abraham Martin left his name to the celebrated Plains of Abraham, near Quebec. She dying in 1651, Chouart married, secondly, at Quebec, August 23, 1653, the sister of Radisson, Margaret Hayet, the widow of John Veron Grandmenil. In Canada, Chouart acted as a donne, or lay assistant, in the Jesuit mission near Lake Huron. He left the service of the mission about 1646, and commenced trading with the Indians for furs, in which he was very successful. With his gains he is supposed to have purchased some land in Canada, as he assumed the seigneurial title of "Sieur des Groseilliers."

Radisson spent more than ten years trading with the Indians of Canada and the far West, making long and perilous journeys of from two to three years each, in company with his brother-in-law, Des Groseilliers....