Voyage of the Liberdade 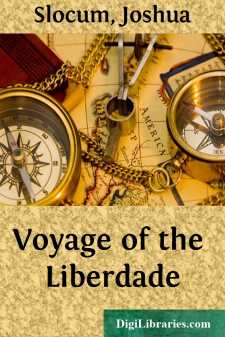 To get underweigh: It was on the 28th of February 1886, that the bark Aquidneck, laden with case-oil' sailed from New York for Montevideo, the capital o' Uruguay, the strip of land bounding the River Plate on the east, and called by the natives "Banda Oriental." The Aquidneck was a trim and tidy craft of 326 tons' register, hailing from Baltimore, the port noted for clippers, and being herself high famed above them all for swift sailing, she had won admiration on many seas.

Her crew mustered ten, all told; twelve had been the complement, when freights were good. There were, beside the crew with regular stations, a little lad, aged about six years, and his mamma (age immaterial), privileged above the rest, having "all nights in"—that is, not having to stand watch. The mate, Victor, who is to see many adventures before reaching New York again, was born and bred on shipboard. He was in perfect health, and as strong as a windlass. When he first saw the light and began to give orders, he was at San Francisco on the packet Constitution, the vessel lost in the tempest at Samoa, just before the great naval disaster at the same place in the year of 1889. Garfield, the little lad above mentioned, Victor's brother, in this family ship, was born in Hong Kong harbour, in the old bark Amethyst, a bona-fide American citizen, though first seeing the light in a foreign port, the Stars and Stripes standing sponsors for his nationality. This bark had braved the wind and waves for fifty-eight years, but had not, up to that date, so far as I know, experienced so lively a breeze as the one which sprung up about her old timbers on that eventful 3rd of March, 1880.

Our foremast hands on the Aquidneck, six in number, were from as many nations, strangers to me and strangers to each other; but the cook, a negro, was a native American—to the manner born. To have even so many Americans in one ship was considered exceptional.

Much or little as matters this family history and description of the crew: the day of our sailing was bitter-cold and stormy, boding no good for the coming voyage, which was to be, indeed, the most eventful of my life of more than five-and-thirty years at sea. Studying the morning weather report, before sailing, we saw predicted a gale from the nor'west, and one also approaching from the sou'west at the same time. "The prospect," said the New York papers, "is not encouraging." We were anxious, however, to commence the voyage, having a crew on board, and, being all ready, we boldly sailed, somewhat against our better judgment. The nor'wester blowing, at the time, at the rate of forty miles an hour, increased to eighty or ninety miles by March 2nd. This hurricane continued through March 3rd, and gave us serious concern for the ship and all on board.

At New York, on those days, the wind howled from the north, with the "storm centre somewhere on the Atlantic," so said the wise seamen of the weather bureau, to whom, by the way, the real old salt is indebted, at the present day, for information of approaching storms, sometimes days ahead. The prognostication was correct, as we can testify, for out on the Atlantic our bark could carry only a mere rag of a foresail, somewhat larger than a table-cloth, and with this storm-sail she went flying before the tempest, all those dark days, with a large "bone in her mouth," making great headway, even under the small sail. Mountains of seas swept clean over the bark in their mad race, filling her decks full to the top of the bulwarks, and shaking things generally.

Our men were lashed, each one to his station; and all spare spars not doubly lashed were washed away, along with other movables that were broken and torn from their fastenings by the wild storm.

The cook's galley came in for its share of the damage, the cook himself barely escaping serious injury from a sea that went thundering across the decks, taking with it doors, windows, galley stove, pots, kettles and all, together with the culinary artist; landing the whole wreck in the lee scuppers, but, most fortunately, with the professor on top. A misfortune like this is always—felt. It dampens one's feelings, so to speak. It means cold food for a time to come, if not even worse fare.

The day following our misfortune, however, was not so bad. In fact, the tremendous seas boarding the bark latterly were indications of the good change coming, for it meant that her speed had slackened through a lull of the gale, allowing the seas to reach her too full and heavy....