Voyage of H.M.S. Pandora Despatched to Arrest the Mutineers of the 'Bounty' in the South Seas, 1790-1791 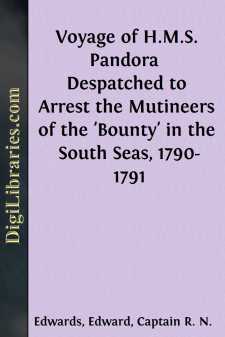 None of the minor incidents in our naval history has inspired so many writers as the Mutiny of the Bounty. Histories, biographies and romances, from Bligh's narrative in 1790 to Mr. Becke's "Mutineers" in 1898, have been founded upon it; Byron took it for the theme of the least happy of his dramatic poems; and all these, not because the mutiny left any mark upon history, but because it ranks first among the stories of the sea, instinct with the living elements of romance, of primal passion and of tragedy—all moving to a happy ending in the Arcadia of Pitcairn Island. And yet, while every incident in the moving story, even to the evidence in the famous court-martial, has been discussed over and over again, there has been lying in the Record Office for more than a century an autograph manuscript, written by one of the principal actors in the drama, which no one has thought it worth while to print.

Though the story of the mutiny is too well known to need repeating in detail, it is necessary to set forth as briefly as possible its relation to the history of maritime discovery in the Pacific. In the year 1787, ten years after the death of Captain Cook in Hawaii, a number of West India merchants in London, stirred by the glowing reports of the natural wealth of the South Sea Islands brought home by Dampier and Cook, petitioned the government to acclimatize the bread-fruit in Jamaica. A ship of 215 tons was purchased into the service and fitted out under the direct superintendence of Sir Joseph Banks, who named her the Bounty, and recommended William Bligh, one of Cook's officers, for the command. It was a new departure. The object of most of the earlier government expeditions to the South Seas had been the advancement of geographical science and natural history; the voyage of the Bounty was to turn former discoveries to the profit of the empire.

Bligh was singularly ill-fitted for the command. While he had undoubted ability, his whole career shows him to have been wanting in the tact and temper without which no one can successfully lead men; and in this venture his own defects were aggravated by the inefficiency of his officers. He took in his cargo of bread-fruit trees at Tahiti, and there was no active insubordination until he reached Tonga on the homeward voyage. At sunrise on April 28th, 1789, the crew mutinied under the leadership of Fletcher Christian, the Master's Mate, whom Bligh's ungoverned temper had provoked beyond endurance. The seamen had other motives. Bligh had kept them far too long at Tahiti, and during the five months they had spent at the island, every man had formed a connection among the native women, and had enjoyed a kind of life that contrasted sharply with the lot of bluejackets a century ago. Forcing Bligh, and such of their shipmates as were loyal to him, into the launch, and casting them adrift with food and water barely sufficient for a week's subsistence, they set the ship's course eastward, crying "Huzza for Tahiti!" There followed an open boat voyage that is unexampled in maritime history. The boat was only 23 feet long; the weight of eighteen men sank her almost to the gunwale; the ocean before them was unknown, and teeming with hidden dangers; their only arms against hostile natives were a few cutlasses, their only food two ounces of biscuit each a day; and yet they ran 3618 nautical miles in forty-one days, and reached Timor with the loss of only one man, and he was killed by the natives at the very outset.

The mutineers fared as mutineers have always fared. Having sailed the ship to Tahiti, they fell out among themselves, half taking the Bounty to the uninhabited island of Pitcairn, where they were discovered twenty-seven years later, and half remaining at Tahiti. Of these two were murdered, four were drowned in the wreck of the Pandora, three were hanged in England, and six were pardoned, one living to become a post-captain in the navy, another to be gunner on the Blenheim when she foundered with Sir Thomas Troubridge.

One boat voyage only is recorded as being longer than Bligh's. In 1536 Diego Botelho Pereira made the passage from Portuguese India to Lisbon in a native fusta, or lateen rigged boat, but a little larger than Bligh's. He had, however, covered her with a deck, and provisioned her for the venture, and he was able to replenish his stock at various points on the voyage....