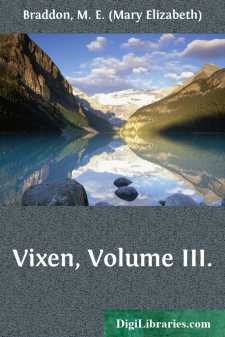 CHAPTER I. Going into Exile.

After a long sleepless night of tossing to and fro, Vixen rose with the first stir of life in the old house, and made herself ready to face the bleak hard world. Her meditations of the night had brought no new light to her mind. It was very clear to her that she must go away—as far as possible—from her old home. Her banishment was necessary for everybody's sake. For the sake of Rorie, who must behave like a man of honour, and keep his engagement with Lady Mabel, and shut his old playfellow out of his heart. For the sake of Mrs. Winstanley, who could never be happy while there was discord in her home; and last of all, for Violet herself, who felt that joy and peace had fled from the Abbey House for ever, and that it would be better to be anywhere, in the coldest strangest region of this wide earth, verily friendless and alone among strange faces, than here among friends who were but friends in name, and among scenes that were haunted with the ghosts of dead joys.

She went round the gardens and shrubberies in the early morning, looking sadly at everything, as if she were bidding the trees and flowers a long farewell. The rhododendron thickets were shining with dew, the grassy tracks in that wilderness of verdure were wet and cold under Vixen's feet. She wandered in an out among the groups of wild growing shrubs, rising one above another to the height of forest trees, and then she went out by the old five-barred gate which Titmouse used to jump so merrily, and rambled in the plantation till the sun was high, and the pines began to breathe forth their incense as the day-god warmed them into life.

It was half-past eight. Nine was the hour for breakfast, a meal at which, during the Squire's time, the fragile Pamela had rarely appeared, but which, under the present régime, she generally graced with her presence. Captain Winstanley was an early riser, and was not sparing in his contempt for sluggish habits.

Vixen had made up her mind never again to sit at meat with her stepfather; so she went straight to her own den, and told Phoebe to bring her a cup of tea.

"I don't want anything else," she said wearily when the girl suggested a more substantial breakfast; "I should like to see mamma presently. Do you know if she has gone down?"

"No, miss. Mrs. Winstanley is not very well this morning. Pauline has taken her up a cup of tea."

Vixen sat idly by the open window, sipping her tea, and caressing Argus's big head with a listless hand, waiting for the next stroke of fate. She was sorry for her mother, but had no wish to see her. What could they say to each other—they, whose thoughts and feelings were so wide apart? Presently Phoebe came in with a little three-cornered note, written in pencil.

"Pauline asked me to give you this from your ma, miss."

The note was brief, written in short gasps, with dashes between them.

"I feel too crushed and ill to see you—I have told Conrad what you wish—he is all goodness—he will tell you what we have decided—try to be worthier of his kindness—poor misguided child—he will see you in his study, directly after breakfast—pray control your unhappy temper."

"His study, indeed!" ejaculated Vixen, tearing up the little note and scattering its perfumed fragments on the breeze; "my father's room, which he has usurped....