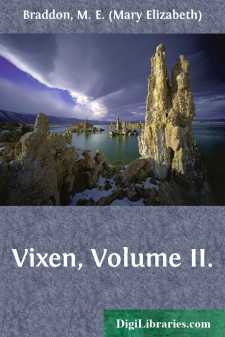 CHAPTER I. "Shall I tell you the Secret?"

For the rest of the way Violet walked with Mrs. Scobel, and at the garden-gate of the Vicarage Roderick Vawdrey wished them both good-night, and tramped off, with his basket on his back and his rod on his shoulder, for the long walk to Briarwood.

Here the children separated, and ran off to their scattered homes, dropping grateful bob-curtsies to the last—"louting," as they called it in their Forest dialect.

"You must come in and have some tea, Violet," said Mrs. Scobel. "You must be very tired."

"I am rather tired; but I think it's too late for tea. I had better get home at once."

"Ignatius shall see you home, my dear," cried Mrs. Scobel. At which the indefatigable Vicar, who had shouted himself hoarse in leading his choir, protested himself delighted to escort Miss Tempest.

The church clock struck ten as they went along the narrow forest-path between Beechdale and the Abbey House.

"Oh," cried Vixen, "I do hope mamma's people will have gone home."

A carriage rolled past them as they came out into the road.

"That's Mrs. Carteret's landau," said Vixen. "I breathe more freely. And there goes Mrs. Horwood's brougham; so I suppose everything is over. How nice it is when one's friends are so unanimous in their leave-taking."

"I shall try to remember that the next time I dine at the Abbey House," said Mr. Scobel laughing.

"Oh, please don't!" cried Violet. "You and Mrs. Scobel are different. I don't mind you; but those dreadful stiff old ladies mamma cultivates, who think of nothing but their dress and their own importance—a little of them goes a very long way."

"But, my dear Miss Tempest, the Carterets and the Horwoods are some of the best people in the neighbourhood."

"Of course they are," answered Vixen. "If they were not they would hardly venture to be so stupid. They take the full license of their acres and their quarterings. People with a coat-of-arms found yesterday, and no land to speak of, are obliged to make themselves agreeable."

"Like Captain Winstanley," suggested Mr. Scobel. "I don't suppose he has land enough to sod a lark. But he is excellent company."

"Very," assented Vixen, "for the people who like him."

They were at the gate by this time.

"You shan't come any further unless you are coming in to see mamma," protested Vixen.

"Then go home immediately, and have some supper," said Vixen imperatively. "You've had nothing but a cup of weak tea since two o'clock this afternoon. You must be worn out."

"On such an occasion as to-day a man must not think of himself," said the Vicar.

"I wonder when you ever do think of yourself," said Vixen.

And indeed Mr. Scobel, like many another Anglican pastor of modern times, led a life which, save for its liberty to go where he listed, and to talk as much as he liked, was but little less severe in its exactions upon the flesh and the spirit than that of the monks of La Trappe.

The Abby House looked very quiet when Vixen went into the hall, whose doors stood open to the soft spring night....