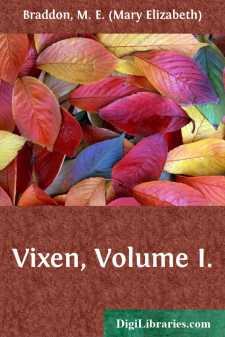 CHAPTER I. A Pretty Horsebreaker.

The moon had newly risen, a late October moon, a pale almost imperceptible crescent, above the dark pine spires in the thicket through which Roderick Vawdrey came, gun in hand, after a long day's rabbit-shooting. It was not his nearest way home, but he liked the broad clearing in the pine wood, which had a ghostly look at dusk, and was so still and lonely that the dart of a squirrel through the fallen leaves was a startling event. Here and there a sturdy young oak that had been newly stripped of its bark lay among the fern, like the naked corpse of a giant. Here and there a tree had been cut down and slung across the track, ready for barking. The ground was soft and spongy, slippery with damp dead leaves, and inclined in a general way to bogginess; but it was ground that Roderick Vawdrey had known all his life, and it seemed more natural to him than any other spot upon mother earth.

On the edge of this thicket there was a broad ditch, with more mud and dead fern in it than water, a ditch strongly suspected of snakes, and beyond the ditch the fence that enclosed Squire Tempest's domain—an old manor house in the heart of the New Forest. It had been an abbey before the Reformation, and was still best known as the Abbey House.

"I wonder whether I'm too late to catch her," speculated Roderick, shifting his bag from one shoulder to the other; "she's no end of fun."

In front of the clearing there was a broad five-barred gate, and beside the gate a keeper's cottage. The flame of a newly-lighted candle flashed out suddenly upon the autumn dusk, while Roderick stood looking at the gate.

"I'll ask at the lodge," he said; "I should like to say good-bye to the little thing before I go back to Oxford."

He walked quickly on to the gate. The keeper's children were playing at nothing particular just inside it.

"Has Miss Tempest gone for her ride this afternoon?" he asked.

"And not come back yet?"

Roderick hitched his bag on to the top of the gate, and stood at ease waiting. It was late for the little lady of Tempest Manor to be out on her pony; but then it was an understood thing within a radius of ten miles or so that she was a self-willed young person, and even at fifteen years of age she had a knack of following her own inclination with that noble disregard of consequences which characterises the heaven-born ruler.

Mr. Vawdrey had not waited more than ten minutes when there came the thud of hoofs upon the soft track, a flash of gray in the distance, something flying over those forky branches sprawling across the way, then a half-sweet, half-shrill call, like a bird's, at which the keeper's children scattered themselves like a brood of scared chickens, and now a rush, and a gray pony shooting suddenly into the air and coming down on the other side of the gate, as if he were a new kind of skyrocket.

"What do you think of that, Rorie?" cried the shrill sweet voice of the gray pony's rider...!