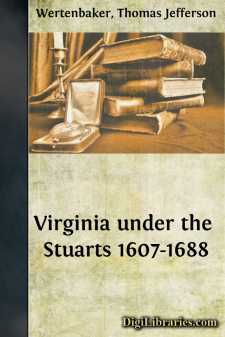 It was in May, 1910, that the author came to Princeton for an interview with President Woodrow Wilson concerning an appointment as Instructor in the Department of History, Politics, and Economics. He was elated when President Wilson engaged him, though not happy over the $1,000 salary. Yet with this sum to fall back on he borrowed $200, and took a trip to England.

In London he went treasure hunting, the treasure of old documents relating to the history of colonial Virginia. He sought out the British Public Record Office, off Chauncery Lane, and was soon immersed in the mass of letters, official reports, journal of the Assembly, and other papers.

The author was prepared to find valuable historical materials in London, for he had spent the summer of 1908 studying the William Noel Sainsbury and the McDonald abstracts and transcripts of the documents in the Record Office deposited in the Virginia State Library. But he was staggered at the extent of the manuscript collection on Virginia history alone. Among the scores of volumes are thirty-two devoted to the correspondence of the Board of Trade, seventeen to the correspondence of the Secretary of State, twenty-two to entry books, letters, commissions, warrants, etc.

When the summer waned he left for America taking with him many pages of closely written notes. But what he had learned served to whet his appetite for more, so that in 1912 and again in 1914 he was back, going over volume after volume, searching eagerly for fear some important point would escape him. The mass of abstracts and notes which he accumulated formed the basis of this volume.

In fact, any political history of Virginia in the colonial period must be based on the documents in the Public Record Office, since most of the copies left in Virginia have been lost or destroyed. Today, however, colonial historians no longer have to visit London to consult them, since transcripts have been made and deposited in the Library of Congress.

In recent years the American Council of Learned Societies has made available other collections of manuscripts which have thrown new light on early Virginia history. The most important of these are the Coventry Papers at Longleat, the residence of the Marquess of Bath. Many of the letters deal with Bacon's Rebellion, and include the correspondence between Berkeley and Bacon, accounts of the Indian war, complaints of the misgovernment of Berkeley, the account of the evacuation of Jamestown written by Berkeley, accounts of Bacon's death and the collapse of the rebellion.

This new material adds new weight to the conclusions reached in this book—that the causes of Bacon's Rebellion were deep-seated, that it grew out of the discontent caused by the Navigation Acts, the heavy taxes, the corrupting of the Assembly by Berkeley, and the misuse of the courts. It in no way shakes the conviction expressed by Thomas Mathews, who himself was involved in the rebellion, that the Indian war was the excuse for it rather than the cause.

Yet certain recent historians have contended that this violent uprising was not a protest against injustice and misgovernment. One has gone so far as to call it merely a quarrel between a rash young man and an old fool. We could with equal justice call the American Revolution just a quarrel between George Washington and George III. Mathews tells us that it was the general opinion in Virginia at the time that it was not Bacon who was chiefly responsible for the uprising, but Thomas Lawrence. Bacon "was too young, too much a stranger there, and of a disposition too precipitate to manage things to that length they were carried," he pointed out, "had not thoughtful Mr. Lawrence been at the bottom."

But neither Lawrence's hatred of Berkeley, nor Bacon's rashness, nor Berkeley's folly, nor the Indian war suffice to explain the rebellion. When the news of the uprising reached Charles II, he thought it past belief that "so considerable body of men, without the least grievance or oppression, should rise up in arms and overthrow the government." He was quite right. Had there been no grievances and oppression there would have been no uprising.

That Bacon's Rebellion is explained in part by poverty and suffering is clear. Philip Ludwell said that the rebel army was composed of men "whose condition ... was such that a change could not make worse." The men who fought so valiantly against the Indians and Berkeley's forces, braved the King's anger, faced death on the gallows were called in contempt "the bases of the people," "the rabble," the "scum of the people," "idle and poor people," "rag, tag, and bobtail." The Council reported that there were "hardly two amongst them" who owned estates, or were persons of reputation....