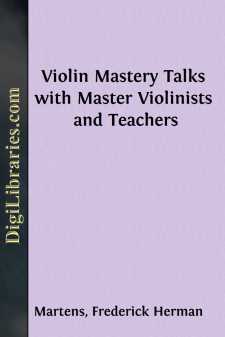 Who is there among contemporary masters of the violin whose name stands for more at the present time than that of the great Belgian artist, his "extraordinary temperamental power as an interpreter" enhanced by a hundred and one special gifts of tone and technic, gifts often alluded to by his admiring colleagues? For Ysaye is the greatest exponent of that wonderful Belgian school of violin playing which is rooted in his teachers Vieuxtemps and Wieniawski, and which as Ysaye himself says, "during a period covering seventy years reigned supreme at the Conservatoire in Paris in the persons of Massart, Remi, Marsick, and others of its great interpreters."

What most impresses one who meets Ysaye and talks with him for the first time is the mental breadth and vision of the man; his kindness and amiability; his utter lack of small vanity. When the writer first called on him in New York with a note of introduction from his friend and admirer Adolfo Betti, and later at Scarsdale where, in company with his friend Thibaud, he was dividing his time between music and tennis, Ysaye made him entirely at home, and willingly talked of his art and its ideals. In reply to some questions anent his own study years, he said:

"Strange to say, my father was my very first teacher—it is not often the case. I studied with him until I went to the Liège Conservatory in 1867, where I won a second prize, sharing it with Ovide Musin, for playing Viotti's 22d Concerto. Then I had lessons from Wieniawski in Brussels and studied two years with Vieuxtemps in Paris. Vieuxtemps was a paralytic when I came to him; yet a wonderful teacher, though he could no longer play. And I was already a concertizing artist when I met him. He was a very great man, the grandeur of whose tradition lives in the whole 'romantic school' of violin playing. Look at his seven concertos—of course they are written with an eye to effect, from the virtuoso's standpoint, yet how firmly and solidly they are built up! How interesting is their working-out: and the orchestral score is far more than a mere accompaniment. As regards virtuose effect only Paganini's music compares with his, and Paganini, of course, did not play it as it is now played. In wealth of technical development, in true musical expressiveness Vieuxtemps is a master. A proof is the fact that his works have endured forty to fifty years, a long life for compositions.

"Joachim, Léonard, Sivori, Wieniawski—all admired Vieuxtemps. In Paganini's and Locatelli's works the effect, comparatively speaking, lies in the mechanics; but Vieuxtemps is the great artist who made the instrument take the road of romanticism which Hugo, Balzac and Gauthier trod in literature. And before all the violin was made to charm, to move, and Vieuxtemps knew it. Like Rubinstein, he held that the artist must first of all have ideas, emotional power—his technic must be so perfected that he does not have to think of it! Incidentally, speaking of schools of violin playing, I find that there is a great tendency to confuse the Belgian and French....