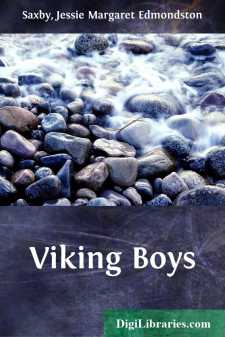 CHAPTER 1 "CALLED AFTER THAT WORK WHICH HE HAD TO DO."

"How I wish I had lived hundreds of years ago, when the Vikings lived; it must have been prime!"

He was a Shetland boy of fifteen who so spoke, and he was addressing his young sister of eleven. They were sitting on a low crag by the shore, dangling their feet over the water, which flowed clear and bright within a short distance of their toes. They were looking out upon a grand stretch of ocean studded with islands of fantastic shape, among which numerous boats were threading their way. It was a fair summer afternoon, and the fishing boats were returning from the far haaf[1] laden with spoil. It had not required a great stretch of imagination to carry Yaspard Adiesen's thoughts from the scene before him to the olden days, when his native Isles were the haunts of Vikinger, whose ships were for ever winging their way over those waters bearing the spoils of many a stormy fight.

"Yes," the boy went on; "what glorious fun it must have been in those days; such fighting and sailing and discovering new places; such heaps of adventures of all sorts. Oh, how grand it must have been!"

"I suppose it was," answered Signy; "but then these people long ago did not have all the nice things we have—books, you know, and—and everything!"

"Oh, tuts! They had Scalds to sing their history—much nicer than your musty books."

"Perhaps!" said the girl. She loved books with a mighty love, but she adored her brother, and what he said she accepted, whether it commended itself to her judgment or not.

"There is no 'perhaps' about it, Signy," he retorted a little sharply. "It is fact—so there! It must have been far more jolly in Shetland then than it is now. Everything so tame and commonplace: mail-day once a week, sermon every Sunday, custom-house officers about, chimney-pot hats and tea! Bah!" Yaspard caught up a pebble and flung it to skim over the water as a relief to his feelings, which received a little additional comfort from Signy's next words.

"Hats are certainly very ugly, especially when they are tied on with strings, as Uncle Brüs wears his; and when a sermon lasts an hour it is tiresome. Yes, and the custom-house people and the revenue cutter are horrid—though the cutter is very pretty, and the officers look rather nice in uniform. But it is very nice to get letters, Yaspard; and tea is nice. Why, what on earth would Mam Kirsty and Aunt Osla do without tea?" and Signy laughed as she looked up in her brother's face.

He was not unreasonable, and admitted the comfort of the cup which cheers and a weekly mail-bag. He even allowed that the sloop which looked after her Majesty's dues was a tidy little craft, and that a kirk and Sunday service were advantages of no ordinary kind. "But," having admitted so much, he said, "why couldn't we have all that, and still be Vikings? why not live like heroes? why not roam the seas, and fight and discover and bring home spoil, and wear picturesque garments, as well as go to church and drink tea?"