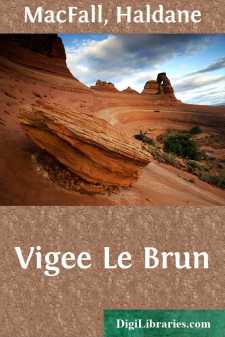 In Paris, in the Rue Coquillière, Louis the Fifteenth being King of France—or rather the Pompadour holding sway thereover—there lived a witty, amiable fellow who plied the art of painting portraits in oils and pastels after the mediocre fashion that is called "pleasing." This Louis Vigée and his wife, Jeanne Maissin, moved in the genial enthusiastic circle of the lesser artists, passing through their sober day without undue excitement; for fame and wealth and the prizes of life were not for them. Boucher was lord of art; and La Tour and Greuze and Chardin were at the height of their genius; but honest Louis Vigée could but plod on at his pleasing portraits, and sigh that the gods had not borne to him the immortal flame.

Yet he was to come near to the glory of it—nearer than he thought. 'Twas a pity that he was robbed of the splendour of basking in the reflected radiance, and by a fish's bone.

It was to have its beginning in that year after the indolent but obstinate king, having fallen foul of his Parliaments in his game of facing-both-ways in the bitter strife 'twixt Church and people, patched up a peace with the Parliament men.

In Vigée Le Brun's portrait of herself and her child we see in full career the Greek ideals that were come upon France—a France weary of light trifling with life, and of mere butterfly flitting from flower to flower.

Our worthy mediocre Vigée could remember the banished Parliament re-entering Paris in triumph on that fourth day of September in 1754 amidst the exultant shouts of the people; the clergy looking on with a scowl the while. On that same day was born to the Dauphin a son—the little fellow called the Duke de Berry—whom we shall soon see ascending the throne as the ill-starred Louis the Sixteenth, for the Dauphin was to be taken before the old king died.

Honest waggish Vigée, painting industriously at his pleasing portraits, would recall it well; since, early in the following year, there was that to happen under his own modest roof which was to bring fame to his name, though he should not live to bask in its full glow.

On the 10th of April 1755 there was born to him a little girl-child, whom they christened Elizabeth Louise Vigée, or as she herself wrote it across the title-page of her Souvenirs, Louise Elizabeth Vigée. Into her little fingers Destiny set the skill that had been denied to her father; the flame was given to her. And by the whimsy of things, there was also born in far-away Vienna, in this same year of 1755, in the palace of the Emperors of Austria, a little princess whom they christened Marie Antoinette; who was to marry the little seven-month old princeling that lay sucking his thumb in the Royal palace near by, and thereby to become future Queen of France.

Like François Boucher, the great painter to the king, Elizabeth Vigée came to the pretty business with the advantage of being an artist's child; like him, she received her first lessons at an early age from her father; and, like him, she moved from earliest childhood in an atmosphere of art and artists....