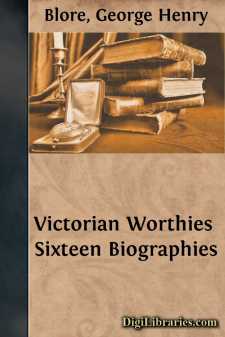 Some excuse seems to be needed for venturing at this time to publish biographical sketches of the men of the Victorian era. Several have been written by men, like Lord Morley and Lord Bryce, having first-hand knowledge of their subjects, others by the best critics of the next generation, such as Mr. Chesterton and Mr. Clutton-Brock. With their critical ability I am not able to compete; but they often postulate a knowledge of facts which the average reader has forgotten or has never known. Having written these sketches primarily for boys at school I am not ashamed to state well-known facts, nor have I wished to avoid the obvious.

Nor do these sketches aim at obtaining a sensation by the shattering of idols. I have been content to accept the verdicts passed by their contemporaries on these great servants of the public, verdicts which, in general, seem likely to stand the test of time. Boys will come soon enough on books where criticism has fuller play, and revise the judgements of the past. Such a revision is salutary, when it is not unfair or bitter in tone.

At a time when the subject called 'civics' is being more widely introduced into schools, it seems useful to present the facts of individual lives, instances chosen from different professions, as a supplement to the study of principles and institutions. There is a spirit of public service which is best interpreted through concrete examples. If teachers will, from their own knowledge, fill in these outlines and give life to these portraits, the younger generation may find it not uninteresting to 'praise famous men and our fathers that begat us'.

It seems hardly necessary in a book of this kind to give an imposing list of authorities consulted. In some cases I should find it difficult to trace the essay or memoir from which a statement is drawn; but in the main I have depended on the standard Lives of the various men portrayed, from Froude's Carlyle and Forster's Dickens to Mackail's Morris and Michell's Rhodes. And, needless to say, I have found the Dictionary of National Biography most valuable. If boys were not frightened from the shelves by its bulk, it would render my work superfluous; but, though I often recommend it to them, I find few signs that they consult it as often as they should. It may seem that no due proportion has been observed in the length of the different sketches; but it must be remembered that, while short Lives of Napier and Lawrence have been written by well-known authors, it is more difficult for a boy to satisfy his curiosity about Lister, Patteson, or Green; and of Morier no complete life has yet been published.

I am indebted to Mr. Emery Walker for assistance in the selection of the portraits.

Three of my friends have been kind enough to read parts of the book and to give me advice: the Rev. A. T. P. Williams and Mr. C. E. Robinson, my colleagues here, and Mr. Nowell Smith, Head Master of Sherborne. I owe much also to the good judgement of Mr. Milford's reader. If I venture to thank them for their help, they are in no way responsible for my mistakes. Writing in the intervals of school-mastering I have no doubt been guilty of many, and I shall be grateful if any reader will take the trouble to inform me of those which he detects.