Vice Versa or A Lesson to Fathers 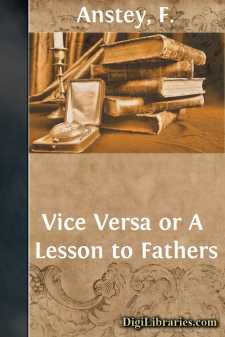 There is an old story of a punctiliously polite Greek, who, while performing the funeral of an infant daughter, felt bound to make his excuses to the spectators for "bringing out such a ridiculously small corpse to so large a crowd."

The Author, although he trusts that the present production has more vitality than the Greek gentleman's child, still feels that in these days of philosophical fiction, metaphysical romance, and novels with a purpose, some apology may perhaps be needed for a tale which has the unambitious and frivolous aim of mere amusement.

However, he ventures to leave the tale to be its own apology, merely contenting himself with the entreaty that his little fish may be spared the rebuke that it is not a whale.

In submitting it with all possible respect to the Public, he conceives that no form of words he could devise would appeal so simply and powerfully to their feelings as that which he has ventured to adopt from a certain Anglo-Portuguese Phrase-Book of deserved popularity.

Like the compilers of that work, he—"expects then who the little book, for the care what he wrote him and her typographical corrections, will commend itself to the—British Paterfamilias—at which he dedicates him particularly."

"In England, where boys go to boarding schools, if the holidays were not long there would be no opportunity for cultivating the domestic affections."—Letter of Lord Campbell's, 1835.

On a certain Monday evening late in January, 1881, Paul Bultitude, Esq. (of Mincing Lane, Colonial Produce Merchant), was sitting alone in his dining-room at Westbourne Terrace after dinner.

The room was a long and lofty one, furnished in the stern uncompromising style of the Mahogany Age, now supplanted by the later fashions of decoration which, in their outset original and artistic, seem fairly on the way to become as meaningless and conventional.

Here were no skilfully contrasted shades of grey or green, no dado, no distemper on the walls; the woodwork was grained and varnished after the manner of the Philistines, the walls papered in dark crimson, with heavy curtains of the same colour, and the sideboard, dinner-waggon, and row of stiff chairs were all carved in the same massive and expensive style of ugliness. The pictures were those familiar presentments of dirty rabbis, fat white horses, bloated goddesses, and misshapen boors, by masters who, if younger than they assume to be, must have been quite old enough to know better.

Mr. Bultitude was a tall and portly person, of a somewhat pompous and overbearing demeanour; not much over fifty, but looking considerably older. He had a high shining head, from which the hair had mostly departed, what little still remained being of a grizzled auburn, prominent pale blue eyes with heavy eyelids and fierce, bushy whitey-brown eyebrows. His general expression suggested a conviction of his own extreme importance, but, in spite of this, his big underlip drooped rather weakly and his double chin slightly receded, giving a judge of character reason for suspecting that a certain obstinate positiveness observable in Mr....