Vice in its Proper Shape Or, The Wonderful and Melancholy Transformation of Several Naughty Masters and Misses Into Those Contemptible Animals Which They Most Resemble In Disposition. 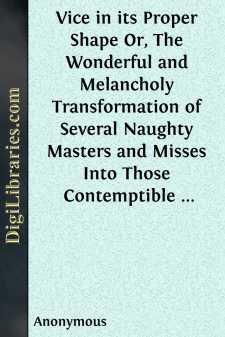 It was the opinion of the wise Pythagoras, and of some other philosophers, that the souls of men, women, and children, after their death, are sent into other human bodies, and sometimes into those of beasts and birds, or even insects; and that they hereby change their residence either to their advantage or disadvantage, according to their good or ill behaviour in their preceding state of existence. This singular opinion still prevails in some part of the Eastindies; and that to such a degree that they make it criminal to put any animal to death: "For how do you know, say they, but in killing a sheep, a bird, or a fish, you murder your father, or your brother, or some other deceased friend or relation, whose soul may inhabit the body of the animal you so wantonly destroy?" An officer in the service of the Eastindia Company, and a particular friend of mine, had like to have lost his life by not paying a proper deference to this whimsical notion; for being some time in that part of the country, and happening to shoot a heron, he was immediately arrested and prosecuted for it by one of the natives. The man insisted that the heron was inhabited by the soul of his father; and supported his point so much to the satisfaction of the court, that had it not been for the friendly assistance of a Jew, who appeared as the captain's advocate, he would certainly have been condemned. The Jew, allowed that what the plaintiff had asserted was strictly true, but pleaded in behalf of his client, that the soul of his, the said client's grandmother, resided in the body of a fish, which the said client had often seen and knew perfectly well; and that at the time when the heron was killed, the said heron was going to dart upon the said fish to devour it; so that the said client being strongly moved thereunto by his natural affection, instantly shot the said heron purely to save the life of his grandmother. This plea was admitted, and the captain was immediately discharged by order of the court. It is well for the reader that the captain escaped as he did: for if he had been hanged for murdering the heron, it is more than probable that it would have been out of his power to have returned to England with that curious little treatise which I have now taken the pains to translate into English for the amusement of the little masters and misses of Great Britain.

It contains a diverting account of several naughty boys and girls, who, after their death (which was generally owing to their own folly) were degraded into such animals as they most resembled when alive. I cannot pretend to say who was the author; for his modesty was so great, that he has not inserted his name in the title page.

The captain tells me, it is the opinion of some of the Indian criticks, that he was an academy-keeper, who wrote for the instruction of his scholars; and of others, that he was a fond father who wrote for the entertainment of his children; but as it is very possible that both of them may be mistaken, I shall not presume to decide which of them have been so fortunate as to discover the truth in a matter of such evident importance....