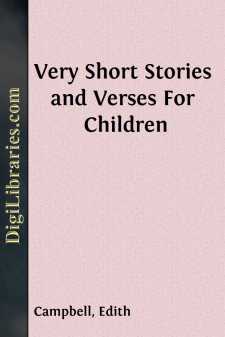 There was once a little boy called Willie. I never knew his other name, and as he lived far off behind the mountain, we cannot go to inquire. He had fair hair and blue eyes, and there was something in his face that, when you had looked at him, made you feel quite happy and rested, and think of all the things you meant to do by-and-by when you were wiser and stronger. He lived all alone with the tall aunt, who was very rich, in the big house at the end of the village. Every morning he went down the street with his little goat under his arm, and the village folk looked after him and said, "There goes Master Willie."

The tall aunt had a very long neck; on the top of it was her head, on the top of her head she wore a white cap. Willie used often to look up at her and think that the cap was like snow upon the mountain. She was very fond of Willie, but she had lived a great many years and was always sitting still to think them over, and she had forgotten all the games she used to know, all the stories she had read when she was little, and when Willie asked her about them, would say, "No, dear, no, I can't remember; go to the woods and play." Sometimes she would take his face between her two hands and look at him well while Willie felt quite sure that she was not thinking of him, but of someone else he did not know, and then she would kiss him, and turn away quickly, saying, "Go to the woods, dear; it is no good staying with an old woman." Then he, knowing that she wanted to be alone, would pick up his goat and hurry away.

He had had a dear little sister, called Apple-blossom, but a strange thing had happened to her. One day she over-wound her very big doll that talked and walked, and the consequence was quite terrible. No sooner was the winding-up key out of the doll's side than it blinked its eyes, talked very fast, made faces, took Apple-blossom by the hand, saying, "I am not your doll any longer, but you are my little girl," and led her right away no one could tell whither, and no one was able to follow. The tall aunt and Willie only knew that she had gone to be the doll's little girl in some strange place, where dolls were stronger and more important than human beings.

After Apple-blossom left him, Willie had only his goat to play with; it was a poor little thing with no horns, no tail and hardly any hair, but still he loved it dearly, and put it under his arm every morning while he went along the street.

"It is only made of painted wood and a little hair, Master Willie," said the blacksmith's wife one day. "Why should you care for it; it is not even alive."

"But if it were alive, anyone could love it."

"And living hands made it," the miller's wife said. "I wonder what strange hands they were;—take care of it for the sake of them, little master."

"Yes, dame, I will," he answered gratefully, and he went on his way thinking of the hands, wondering what tasks had been set them to do since they fashioned the little goat. He stayed all day in the woods helping the children to gather nuts and blackberries. In the afternoon he watched them go home with their aprons full; he looked after them longingly as they went on their way singing. If he had had a father and mother, or brothers and sisters, to whom he could have carried home nuts and blackberries, how merry he would have been. Sometimes he told the children how happy they were to live in a cottage with the door open all day, and the sweet breeze blowing in, and the cocks and hens strutting about outside, and the pigs grunting in the styes at the end of the garden; to see the mother scrubbing and washing, to know that the father was working in the fields, and to run about and help and play, and be cuffed and kissed, just as it happened. Then they would answer, "But you have the tall lady for your aunt, and the big house to live in, and the grand carriage to drive in, while we are poor, and sometimes have little to eat and drink; mother often tells us how fine it must be to be you."

"But the food that you eat is sweet because you are very hungry," he answered them, "and no one sorrows in your house....